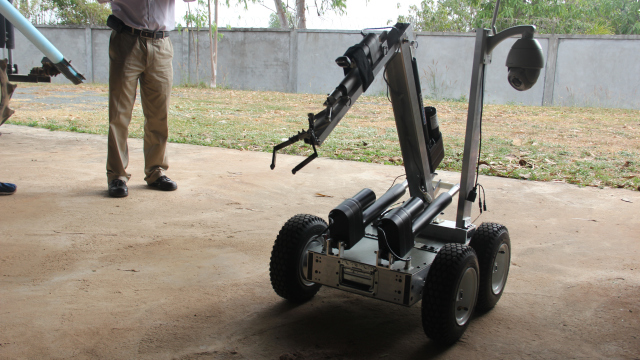 A team from Villanova University, Philadelphia, comprised of four faculty and more than twenty-five students, has developed a ‘bomb squad’ robot. The robot is intended to be used in developing countries to deal with explosive devices and uses a Raspberry Pi and an Arduino. The boards, together with plenty of other hardware, drive four wheels, a robot arm and a water cannon that can be used to detach a fuse from the explosives on a device. The whole robot is expected to come in around $10,000, which is a fraction of the cost of commercial products, generally costing between $50k-$100k.

It’s taken them just over three years to get to this point, and that has included a field test in Cambodia. When starting out, they had four primary objectives (which have been satisfied):

They’re now seeking donors to bring the product to market.

You can see a video about the robot below. There’s more information on the Villanova website and also on Robotics Business Review. There is also a National Geographic interview with members of the team available.