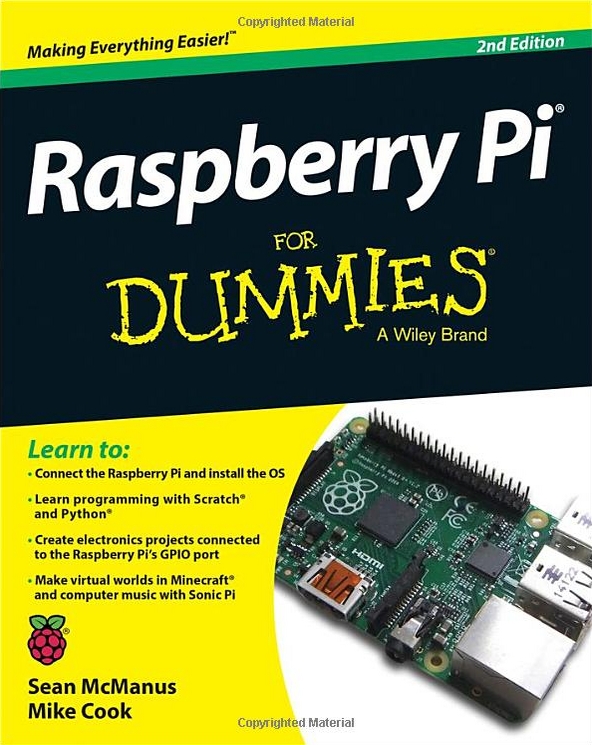 Back in March last year, I reviewed Raspberry Pi for Dummies by Sean McManus and Mike Cook and gave it a solid 7/10. I recently received a copy of the 2nd edition of the book and have been asked to review it. Most of my original review stands so in this review I’ll concentrate on the differences, additions and improvements.

First of all, the book has been completely updated to take account of the release of the B+. The Pi 2 has been released in the meantime, of course, but because the 2nd edition has been updated for the 40-pin GPIO header, everything in the book is appropriate for the Pi 2. The section on installing the operating system now includes details of the NOOBS boot-up system which can be used to install the main operating system.

Three new chapters have been included. The first of these is all about Minecraft. After an introduction on how to control your character within the Minecraft world, the chapter goes on to take you through a program that will help you create mazes within the world. This is a great project as it introduces you to all the concepts you need to understand in order to interact with Minecraft through Python. It originally appeared in the book “Raspberry Pi Projects” (which I reviewed here and particularly praised the Minecraft chapter) and it fits very well into the Dummies book.

The next new chapter concerns Sonic Pi. It’s pretty much a whistle-stop tour through the various ways you can program using Sonic Pi. It does stop short of getting into “live coding”, but that’s a fairly advanced concept that is better off dealt with outside a Dummies book. The chapter does introduce threading, though, which is good as it enables you to set-up multiple different ‘streams’ of music that are played simultaneously.

The last new chapter is an appendix at the back of the book about alternative operating system RISC OS. It’s a pure introductory chapter and doesn’t go into much detail, although it does give you the ‘flavour’ of the system which should be enough to help you determine whether or not you’re likely to give it a go.

The addition of the new chapters (especially on Minecraft and Sonic Pi) and the updates to take account of the new versions of the Pi greatly improve this book. Although the Pi 2 has since been launched, not much has changed from a software point-of-view and so the book now applies to all models of the Pi. I recommend getting hold of a copy if you’re just getting started with the Pi as part of your library. Additions and updates result in a strong 8/10 rating for this 2nd edition.

You can get hold of the book from Amazon.co.uk for around £8.50, which is a very attractive price for what is a very large book.