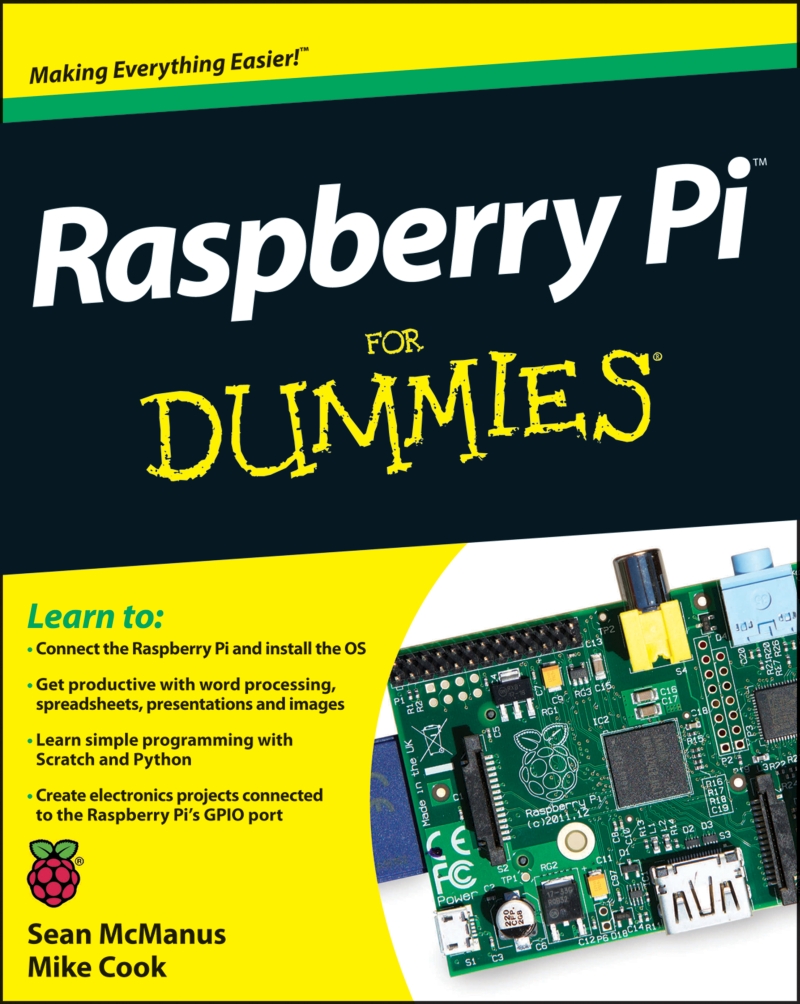 Raspberry Pi for Dummies was sent to me by Wiley for review. So here goes!

Written by Sean McManus and Mike ‘Grumpy Mike’ Cook, Raspberry Pi for Dummies is a comprehensive look at setting the Pi up, administering it, using it as an office machine, using it for programming and using it for hardware hacking.

It’s written in an easy-going (occasionally anarchic) style which fits in with all the other ‘Dummies’ guides that are out there. This book has personality and it’s easy to like the style.

To start with, the Pi is introduced and the hardware discussed. I particularly liked the section on it’s limitations as this is essential information to grasp if you are to use your Pi to it’s limits. Following that, there is a description of downloading and flashing an operating system to your SD card. This is now out-of-date as the best way of getting the OS onto your SD card is now to use NOOBS, but the information is still accurate if you want to do it manually. After that, the writers take us through the various peripherals you need to plug in to take your Pi from being an attractive circuit board to being a fully usable computer. I was disappointed that there wasn’t mention of how to connect to a VGA monitor (which is a not-uncommon problem) using an adapter. They also do not cover connecting to a wi-fi network, which is a shame, as some homes do not have their router in a suitable location.

The next part covers using Linux both via the desktop and via the command line. The Linux shell section is particularly good here and covers all the commands you’re like to want to use in day-to-day operation. There’s lots of info about file management here, which is good to see.

The next part is about using the Pi for “work and play”. This section covers using a couple of software packages: LibreOffice for basic office work and GIMP for image manipulation. This is useful as these two activities are the most common when using a computer, so it’s worthwhile having them there, if only so people can understand the analogue between something like Microsoft Office and the package you’d use on the Pi. After that, the book takes you through creating a website with the Pi. This is the first time you’re asked to do something creative and seems slightly out-of-keeping with the purpose of the Pi. However, it’s pretty comprehensive and does delve into the HTML to help you understand it. The book then continues into installing and using RaspBMC to play audio and video on the Pi. Again, this feels slightly odd. I would’ve preferred to have seen how to play video and audio through the normal desktop interface that you’d already been introduced to.

Part 4 covers programming in two flavours: Scratch and Python. Programming concepts are introduced and there are fully worked examples for both languages. I particularly like the section in Scratch which deals with fixing a ‘bug’ – a great skill for every programmer to have. The Python section is good and again introduces programming concepts before moving onto the example scripts. Pygame is also covered here and there’s a great Breakout example game to type in and follow.

Part 5 is titled “Exploring Electronics with the Raspberry Pi”. There is some great fundamental electronics information here and you are introduced to concepts such as resistance, current etc. The GPIO pins are introduced and described so that the beginner can understand what those ‘sticky up bits’ are. There is also a very good section on soldering here – very good for the beginner, though more pictures might have helped. However, I would have preferred much more breadboarding electronics here – I think the authors have missed a trick by delving so quickly into soldering. While it’s true that most electronics projects result in needing to solder, it is also true that most projects start out on breadboards and they could have spent much more time on that medium before moving onto more permanent circuits. This part of the book then moves onto creating a fully-fledged project. It seemed a bit quick to me and again, the lack of prototyping shows here. I would like to have seen something like the Pi Cobbler be used with a breadboard showing how most people start out. Whereas the beginning of the book could be understood by young teenagers, I think by this point in the book it would take an adult to get to grips with what they’re talking about. Then next bit deals with using the GPIO pins more extensively and then moves onto capturing analog inputs. This is quite advanced stuff now and I wonder if it isn’t perhaps too complex for a ‘Dummies’ book. I was particularly surprised to see a “surface mount” component in use. Remembering that the reader has probably only started to solder, surface mounting would be way beyond their capabilities.

The final part of the book is “The Part of Tens” which is a standard fixture with Dummies books. In this Dummies book, the writers cover 10 “great software packages” and 10 “inspiring projects”. The inspiring projects bit is particularly good as it leads the reader to blogs where they might find additional projects as well as the 10 featured.

There are two appendices. The first is a troubleshooting guide (in which ‘change the power supply’ is surprisingly near the end of the basic steps list) and the second is a list of the GPIO pins and what functions they perform. As expected, there is also a comprehensive index.

There are a few flaws with the book – my main issue being with how quickly it gets into complex circuitry and soldering concepts. That’s not to say the information is wrong or inappropriate – but the speed of the book in this part accelerates too quickly in my opinion. I wonder if this book might be better off in the hands of parents with Pis rather than children.

Having said that, the other parts of the book more than make up for any ‘scare factor’ that the complex concepts might provoke. The basic maintenance, productivity and programming sections are excellent.

So, a mixed reception for this book, but not an overtly negative one. I must score it a solid 7/10.