I subscribe to a lot of Blogs for the Raspberry Pi.
The newest post that I came across was Jacob Clark’s Raspcontrol.

He’s developed a web-based control panel for headless Pis, so you can see what Pi is doing remotely without going anywhere near a sh terminal or VNC! 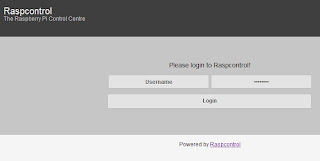 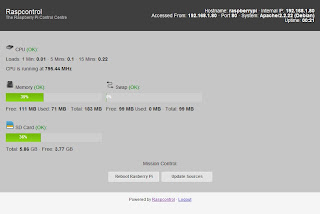 New update
As I was writing this, I noticed a new update for Raspcontrol
So, first I did:

Then, I got the new sources from github:
This means your raspcontrol folder and URL now contains the new code and dashboard. Use the same username/password as you did the first time. 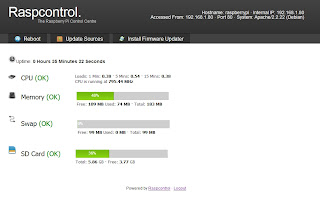 I’m calling an end to Phase 1 of the PiPod project. I have a working device and all the project aims have been completed.
There is a second Phase, but I need to get a couple of parts before I start doing that.

The original post showing the components of the PiPod can be found here.

Some photographs of my “PiPod” 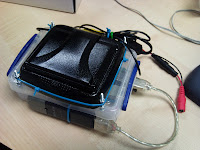 So, this is it, the PiPod. As you can see, it’s a self-contained unit built around a small Really Useful Box. On top, you can see the 3.5″ car rear view monitor. This is held in place with friction from four screws and bolts. It was pretty secure in there, but I added some joined cable ties to reinforce the ‘holder’.
You can see the wires for the screen, including the power inlet (the red thing). You can also see the Belkin WiFi dongle connected using a small USB extension lead so it can be attached to the box. 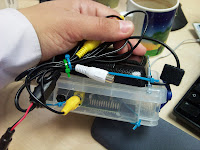 This is a view of the side of the PiPod showing that I’m using the composite video output to connect to the screen. The white socket is a spare input for the screen, which I’m not using. You can see on the right a Velcro loop that I use to hold the power cable so it doesn’t drop off the table when disconnected. You can also start to see how the Pi is held in place inside the box… Cable ties again.
I hand-cut (with a craft knife) two holes for the sockets that side. 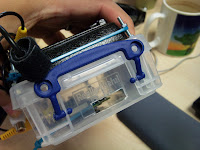 This is an end-on view showing the hole I cut out for the power cable. I know, it’s all a bit rough, but it was fun! 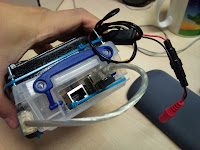 The other end of the PiPod showing the opening for the LAN port and the USB ports. You can just make out the nano Bluetooth adapter. One of the big problems with the Pi is that if your USB device plug is a bit on the large side (or the case of the device is) then it becomes very difficult to fit two plugs in, one on top of the other. That’s why the extension cable came in handy – it was short enough not to lose too much power and meant that the USB port didn’t get damaged. 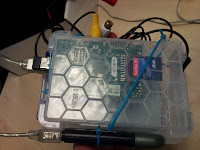 This is the underneath of the Pi – you can see the SD card and the cable ties. Messy, but it works well. 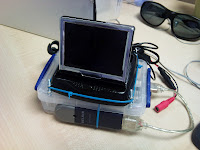 I love my little flip-up screen! I could take it out of there and mount the screen direct to the lid of the box, but I don’t want to damage the screen by prising it out. It’s nice to have the built-in screen protection anyway. 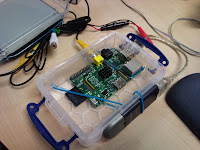 And the top comes off… I needed to make sure that I could still get the SD card in and out, but to have it inside the box (rather than sticking out, which is how most of the ‘professional cases do it. It’s a bit fiddly, but with the cable tie going diagonally across, it’s still accessible. I cut a few of the small bits of the outer part of the box away so that the cable ties laid in the ‘grooves’ on the corners. I am covering the HDMI port here, with the USB dongle, but made it so you could remove the dongle. 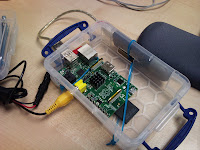 View from the other side.
And it all works! I would’ve put a video up, but forgot to bring the power cable in today.
Speaking of power, the whole thing runs off two power cables – one for the screen (12V) and one for the Pi (5V). I would at some stage like to get the whole lot running off battery, but I think that might be a lot of expense just for this project, which does everything I wanted it to anyway!

In terms of power, the WiFi dongle is slightly underpowered, but my experiments with a powered USB hub were hit-and-miss and I didn’t want to buy another one. It connects to my home and work WiFi nicely anyway.

The last part of recording this project will be a video showing boot-up, X-desktop operations and using the Rii keyboard/touchpad. That’ll be tomorrow! 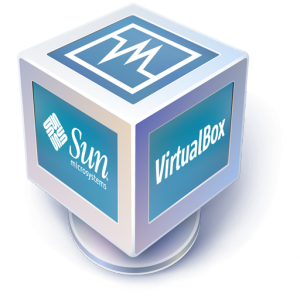 Taking a quick break from my PiPod project, which is essentially done, bar photos and videos of it actually working!

I’ve decided that having a “virtual Pi” would be handy so that I can mess about with the OS without worrying too much! Plus, it means I don’t have to carry my Pi around with me all the time if I just want to try some Python etc out.

Important note:
For Windows users, it seems that the recommended solution for emulating the Pi is to use qEmu on Windows. Take a look at this Sourceforge project: Raspberry Pi Emulation in Windows.

Just so you know what you’re installing on your main computer… VirtualBox is a wonderful, free, virtual computer creator and viewer. There are a variety of platforms it works on. I’m actually using a version I already have on my Windows 7, 64-bit machine.

I’m referencing this guide from the Southend Linux User Group to a certain extent. I know, random, but that’s what Google came up with!
I should say before we begin that I’ve tried both the ‘Lenny’ and ‘Sarge’ Debian installs available from virtualboxes.org and neither of them worked (Lenny stopped at “Select and install software”, Sarge gave a rather horrid “Kernel panic”) hence I now use the official Debian site download instead!

This takes around 10 minutes to install at work, and we’re on a T1 connection. The reason it’s so slow is probably because of where the file is coming from rather than the connection itself.
And we’re back…
It’s interesting… the desktop comes up (although it’s blue, rather than raspberry-coloured… Odd). It’s a problem others have come up against.

For Windows users, it seems that the recommended solution is now: Raspberry Pi Emulation in Windows.

Never mind, it was an interesting practical experiment, which sort-of works apart from the colour issue. Non-Windows users may find these instructions still useful, so I will publish this post anyway!

Here we enter the murky world known colloquially, by me, as “Oh, Bluetooth, why do you mock me?”
This has been the biggest pain in the butt to get working, but hey, no-one ever said that the RPi was going to be easy.

Nice logo, isn’t it. Took me all of 30 seconds to search for it on Google images.

Let’s remember, folks, Bluez is the official bluetooth stack for Linux! So it should work on everything, yes? Yeah, right. Here we go with the steps… 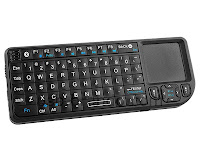 Onto the good bit. Getting your bluetooth device connected. In my case, I have a Rii bluetooth keyboard/touchpad.

My one came with a nano USB bluetooth dongle. In other words, it’s very small. Which is good.

If you find those last few steps unfollowable, comment on this post and I’ll try and flesh it out a bit.

First of all, make sure you expand the SD card – you don’t want to run out of space!

The reason you do sudo is that it needs to know who to run the server as – remember, you’re not logged in before the login prompt comes up!

Now, you should be able to reboot and connect to the VNC server from your laptop, for instance.
You’ll need to download the Tight VNC viewer to do this. I know of no better way than getting WiFi to connect automatically than using the wonderful wicd-curses package. So, here’s how to do it:

The beauty of doing it like this rather than via the command line is that wicd runs as a daemon when your Pi starts up and will automatically connect to the network without you doing anything else.
NB: You may have to wait a minute or so for it to connect.