A guest post from my close friend, Tim Richardson, on his efforts to get his very own PCB designed and manufactured with Chinese company PCBWay.

Recently, I decided to design a couple of PCBs for the Raspberry Pi, something that I had not done before. I’ve written about the process of learning elsewhere, but wanted to show my appreciation in this blog post of the company that I used to get the boards made.

I designed the first board before looking around for a manufacturer. I wasn’t sure that I would have the ability to design one as there were a lot of things to learn about since I know very little about electronics on top of what I learnt when writing the CamJam EduKit worksheets.

I used KiCad to design the board.

My first board was extremely simple (just two GPIO headers joined together), so I really didn’t want to pay too much for them. That, and I had very little confidence that my first board would work, despite it being so simple!

I searched the internet for UK manufacturers, but found that they seemed to be aimed at AutoDesk Eagle users; I had tried the software, but at the time did not understand anything about how it worked, so I needed one that could handle KiCad designs. I also found that the UK manufacturers were pretty expensive and, with postage added on top, that made my simple board look ridiculously expensive.

I stretched my gaze out further and took a look at Chinese manufacturers. I had heard that they were pretty reasonably priced, but that delivery could be slow.

I visited a few sites but found that I couldn’t make head-nor-tail about what they needed. I eventually stumbled upon PCBWay during my search and I found a page that described how to generate the required files on their website. The site used plain, simple English and diagrams to show me exactly what I needed to do to generate files for manufacture. In fact, the PCBWay technical support area has a quite extensive range of subjects.

And then there was the price; with a special offer, the first 10 boards was just $8 including postage. I was not in a major hurry, so didn’t mind waiting.

There was an extensive set of options to choose from for your boards. You are not left alone to fathom what each means – the little information button next to each selection helps you to make the right choice, but if you really do get stuck there is always someone on the end of the chat line to help. 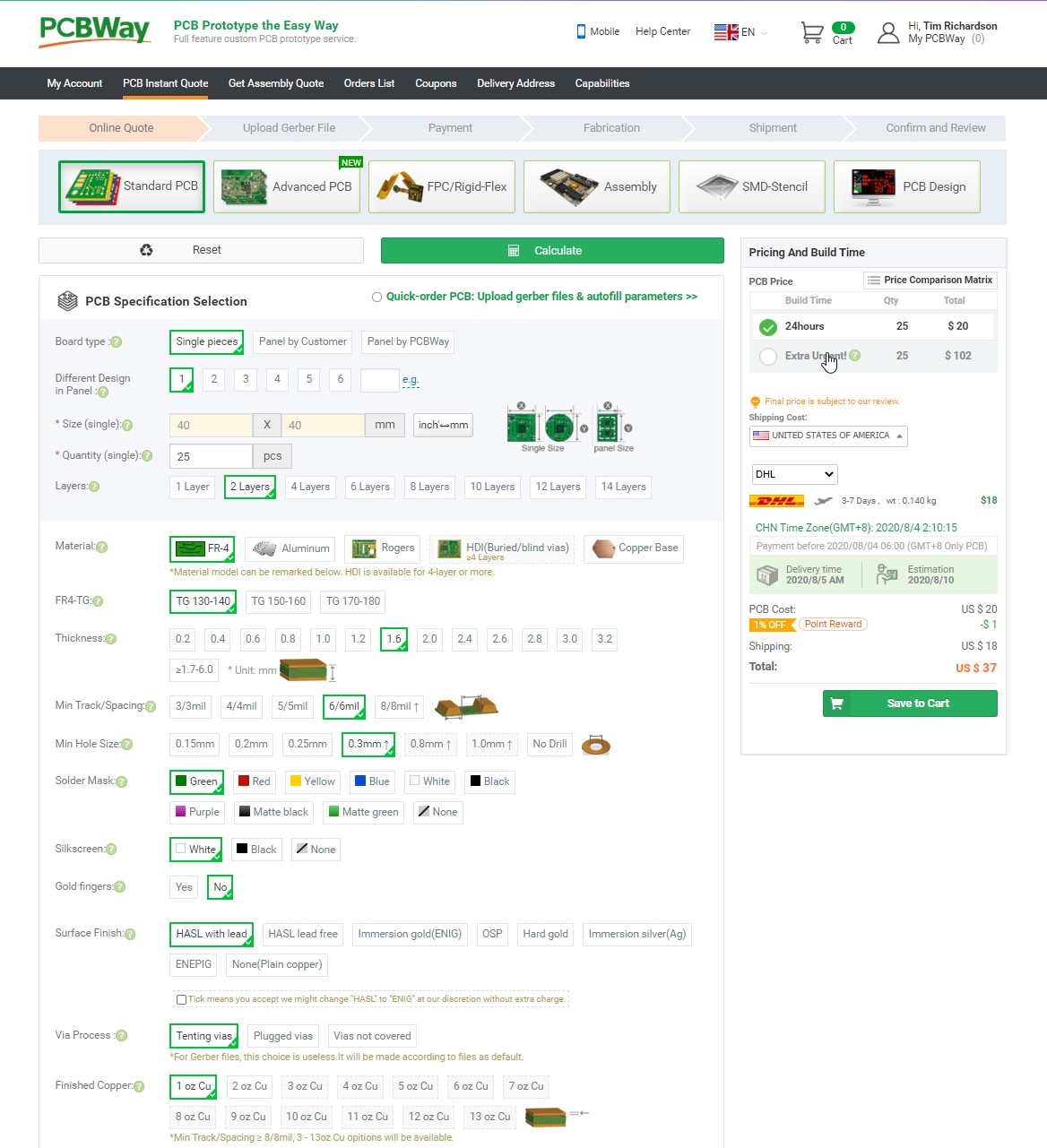 By the time the boards arrived, I was on my way to completing my second, more extensive board.

I was really pleased with the first board (picture below). It worked perfectly, for a start! 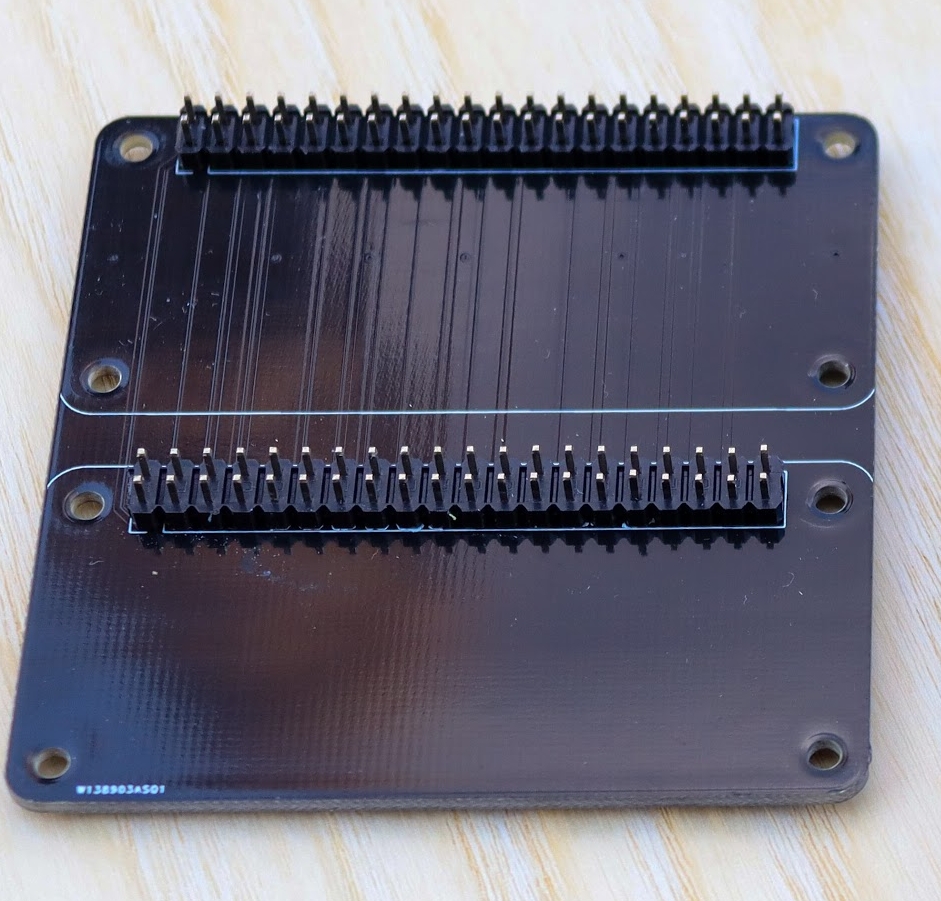 When it came time to manufacture my second board, I had no hesitation in returning to PCBWay, but this time I chose to have more boards made (25) and paid for fast postage. Within a week, my new prototype boards arrived! There were only a couple of design faults that I had made, but they were minor and will be changed if I get more made. 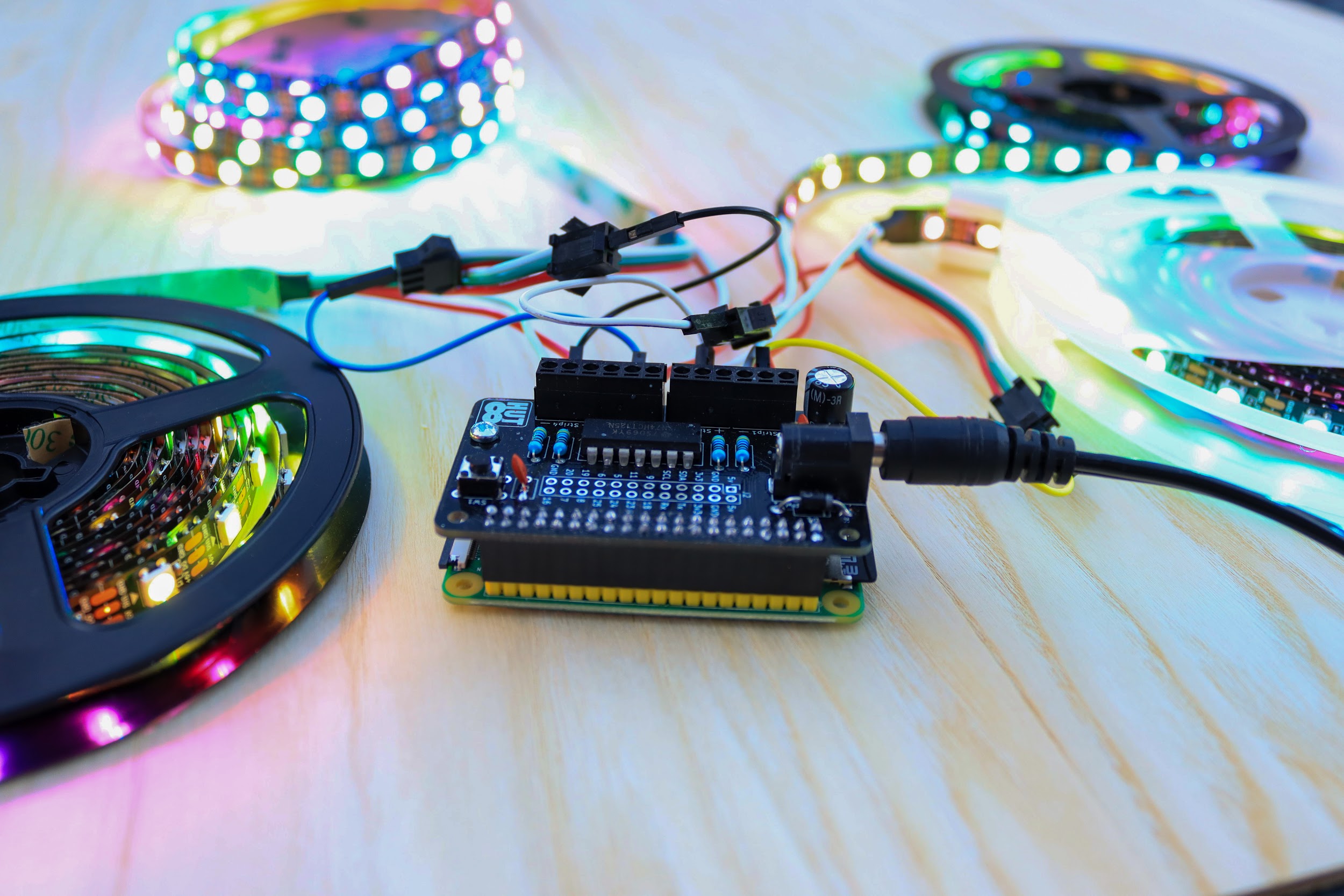 The finished second board – it drives four strings of WS2818 LEDs 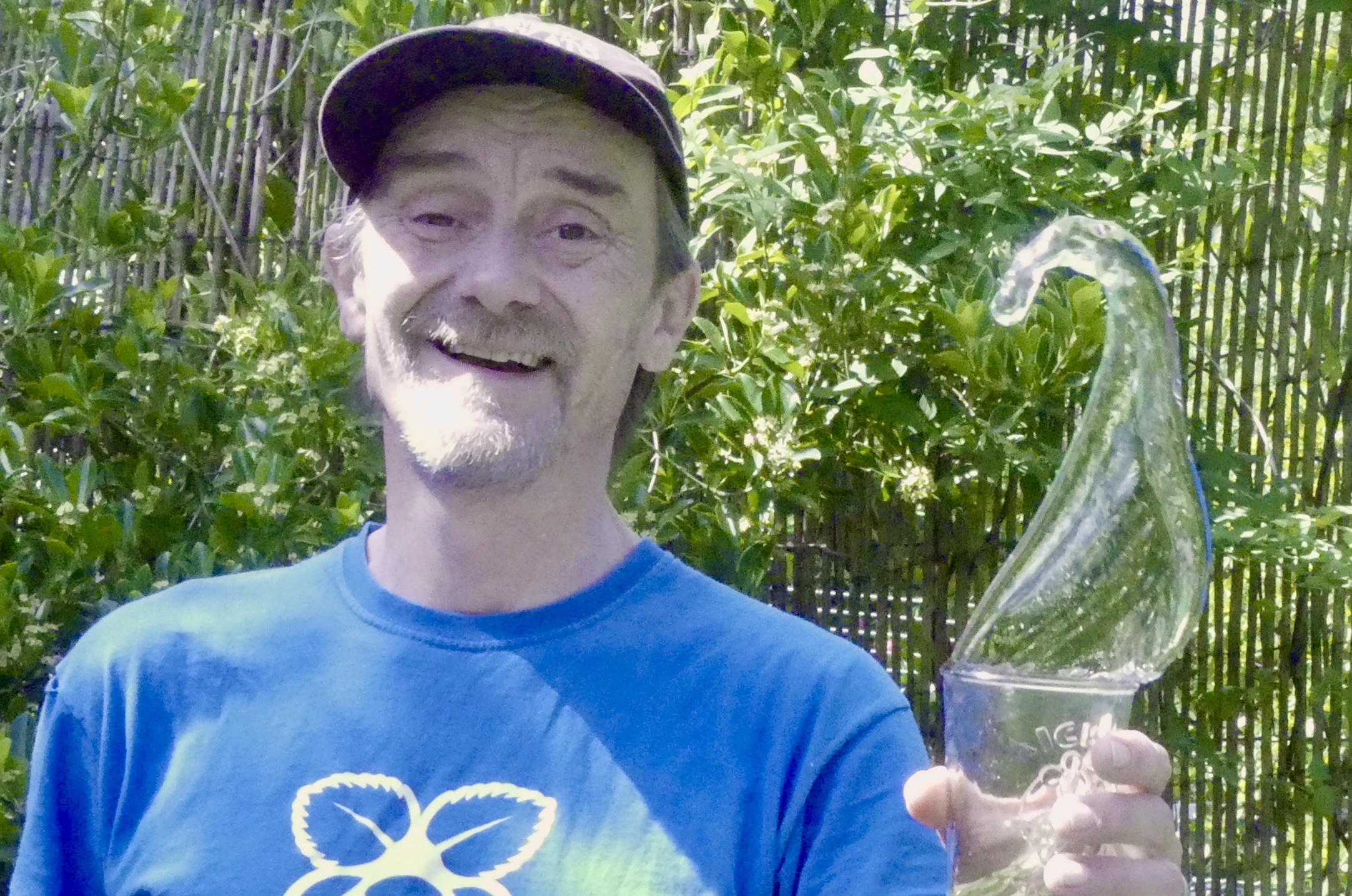 David Pride has taken his Panasonic Lumix DSLR camera and a Raspberry Pi and created a little bit of magic. He’s adapted (read: taken apart and hacked with a soldering iron!) a quick release mechanism for the DSLR and wired it up to the Pi via an NPN transistor which gives him the ability to electronically trigger the taking of a picture.

Some adaptation of OpenCV code ensured that he triggered a shot on movement and then he set it up and let it rip. The sample shots (of which the one above is an example) can be seen, alongside his blog post, here. 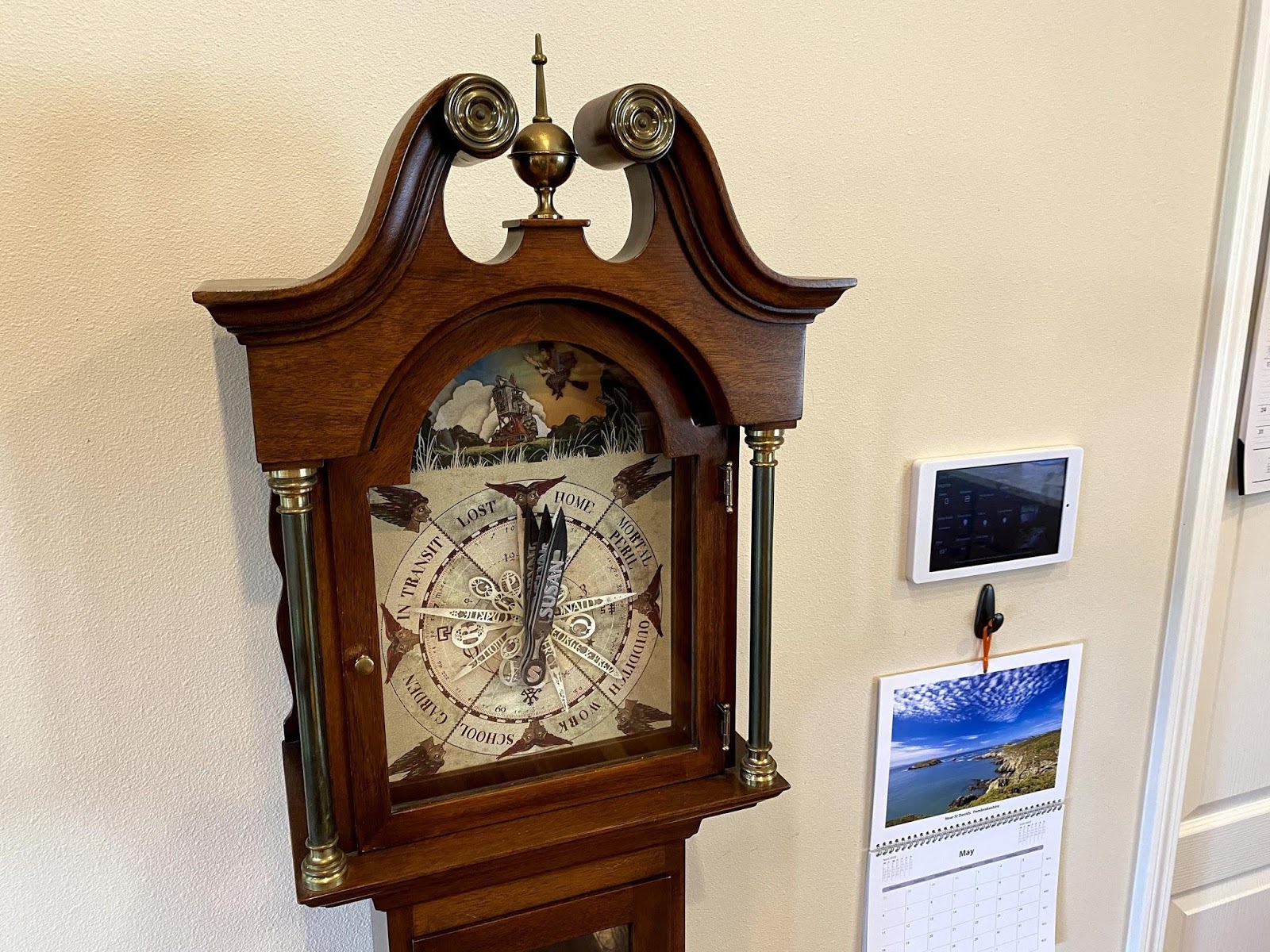 Here’s a lovely Harry Potter-related project from someone who prefers to be anonymous but whose handle is “RandomString”. It’s a Weasley location clock built into a grandfather clock. The whole system uses Home Assistant which is a piece of software which reads in the location of the family’s mobile phones which have Life360 installed on them. Updates are sent from Home Assistant to a Raspberry Pi using MQTT and the clock then turns the relevant clock hand to indicate the location of the individual.

The Pi is fitted with an Adafruit 16-channel Raspberry Pi Servo HAT (that’s Adafruit. The Pi Hut also sells them) and servos are used to move the hands. You can see all the code and build notes for the project on GitHub and you can read more on the maker’s blog here. There’s even a photo gallery of the build and how it all fits together!

We’ve seen Potter projects before, but I think this one is, perhaps, the classiest. 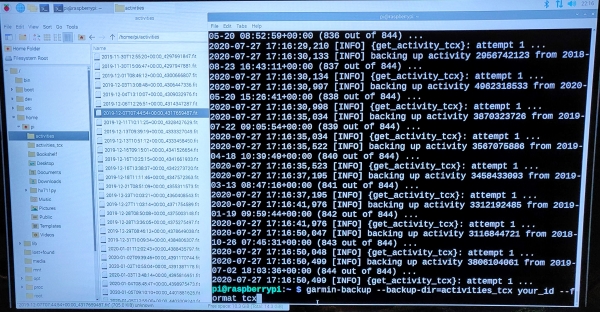 Recently, American GPS and fitness company Garmin suffered a cyber-security nightmare: a ransomware attack. This resulted in a three-day outage between 24th and 26th July 2020. The systems seem to be coming up again now and blogger Alex Eames decided to grab his exercise data from Garmin just in case. This is done using Python and a library called garminexport. You can read all about how to do it yourself via RasPi.TV. 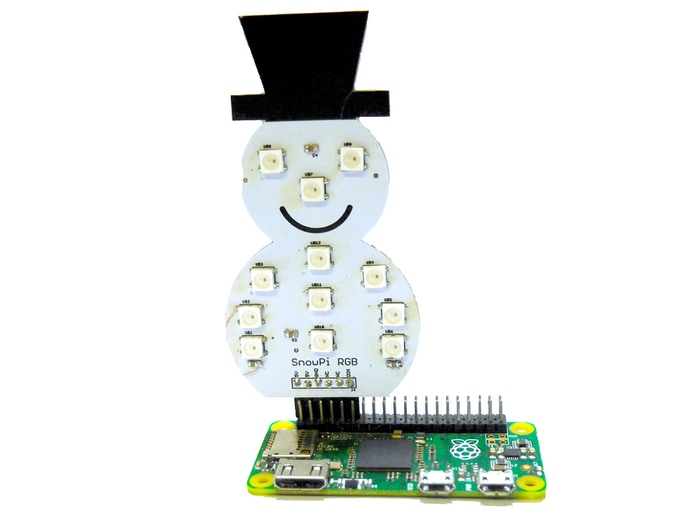 Ryan Walmsley has just launched a Kickstarter for the SnowPi: a lovely little Christmas-themed add-on for the Raspberry Pi and an adapter to make it work with the micro:bit. The pre-assembled board is in the shape of a Snowman and features 12 RGB LEDs. It’s a fun board to have on display during the festive season and Ryan’s launched it in enough time to get everything produced and shipped before Christmas. If you’re interested, head over to Kickstarter and take a look at the pledges which start from £8 + shipping. The campaign video is below 🙂 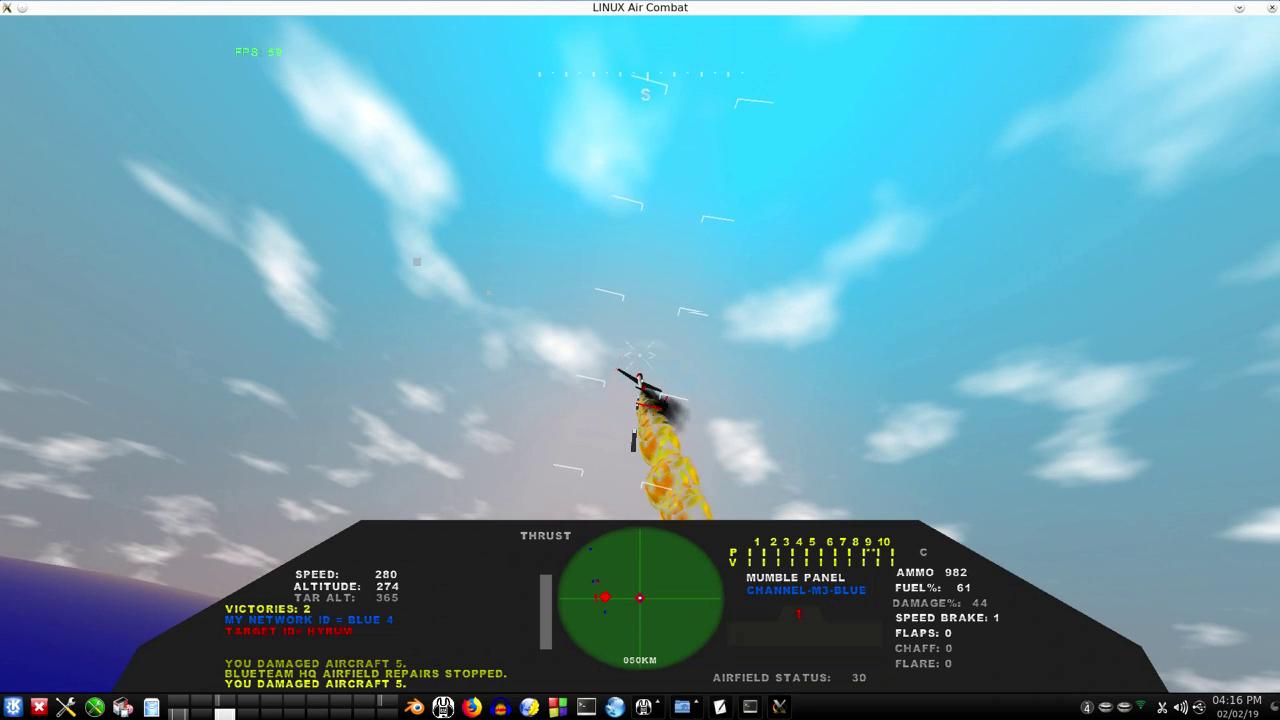 Linux Air Combat looks like a great flight simulator, but it has previously struggled to be installed and run on the Raspberry Pi. Lack of processor speed and memory has meant that the Pi hasn’t quite been up to the challenge. Now, great news from B Bosen who has reported on the Raspberry Pi Forums that LAC works on the 4GB Raspberry Pi 4. You can watch a video of the simulator in action below:

If you’d like to install it and have a go yourself, you can find out how to do it on the video below:

An installer for the Pi 4 is available here and you can find out tonnes of information about the software on the author’s website.

It sounds, according to this page, that you might run into dependency issues, so feel free to comment below as to what you’ve experienced and how you’ve solved them (if you did!)

Big thanks to Simon Walters on Twitter for spotting this on the forums!