A Day with the RyanTeck #RaspberryPi Budget Robot Kit

Ryan Walmsley was kind enough to lend me one of his Budget Robotics Kits and I spent the day putting it together and doing a bit of programming to make the motors work. There was a grand unboxing to start with: 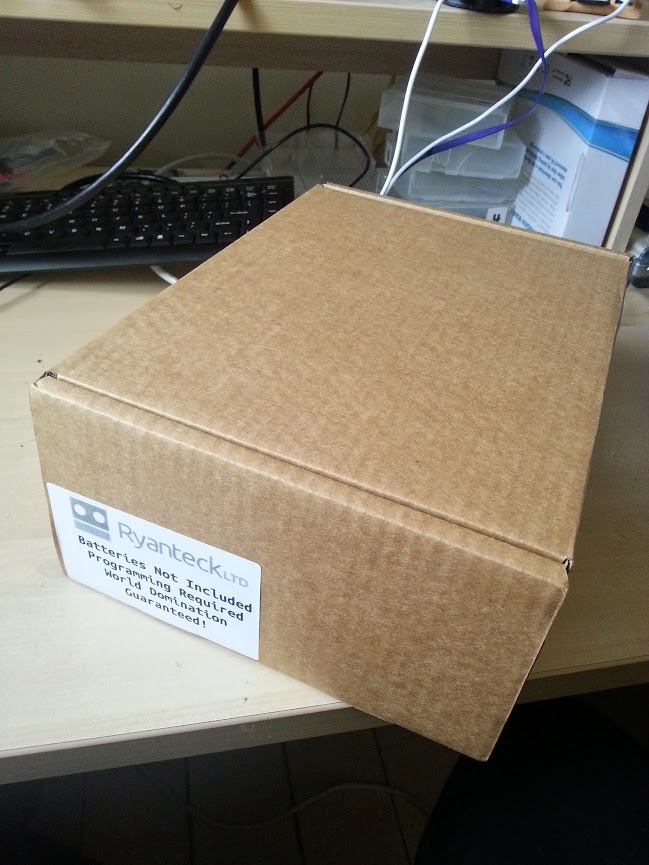 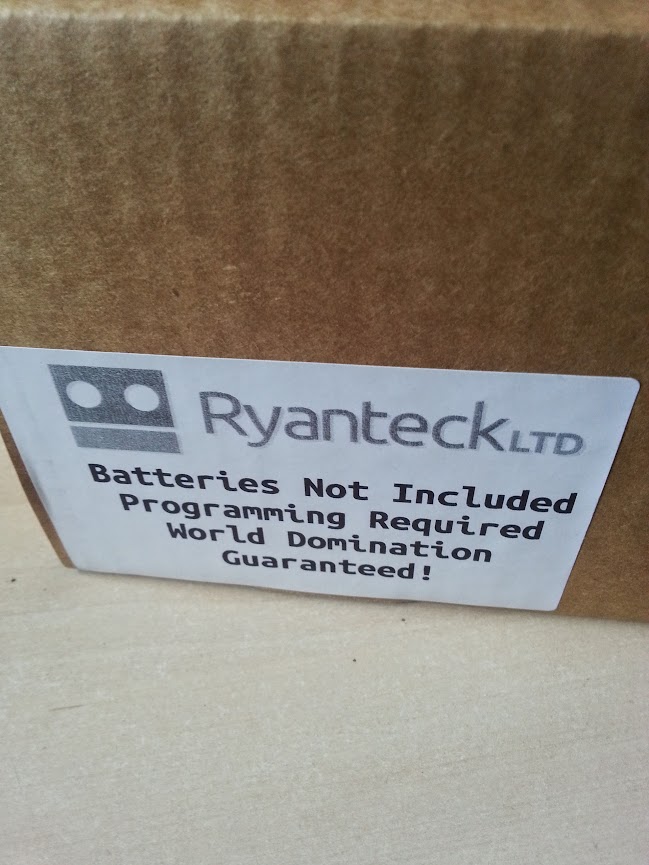 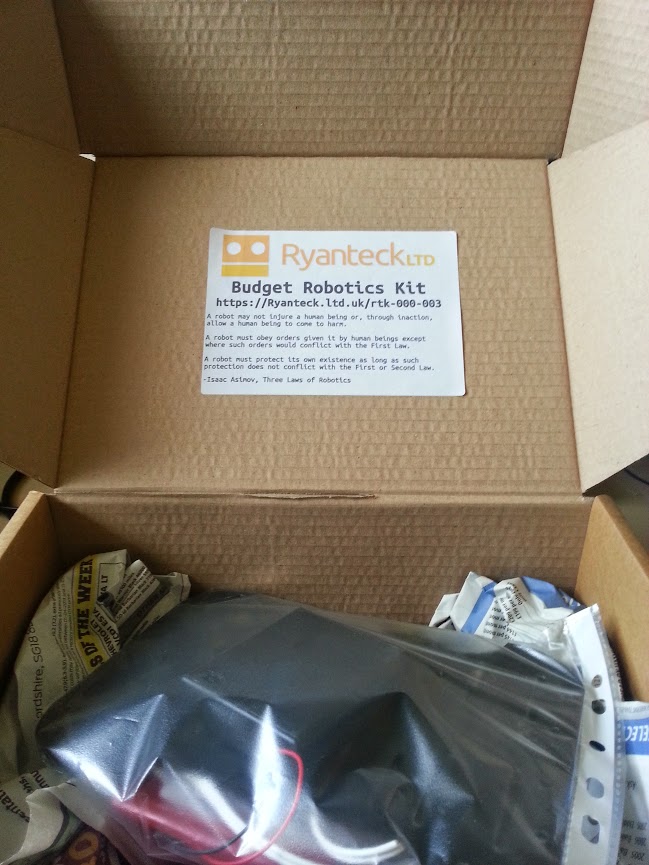 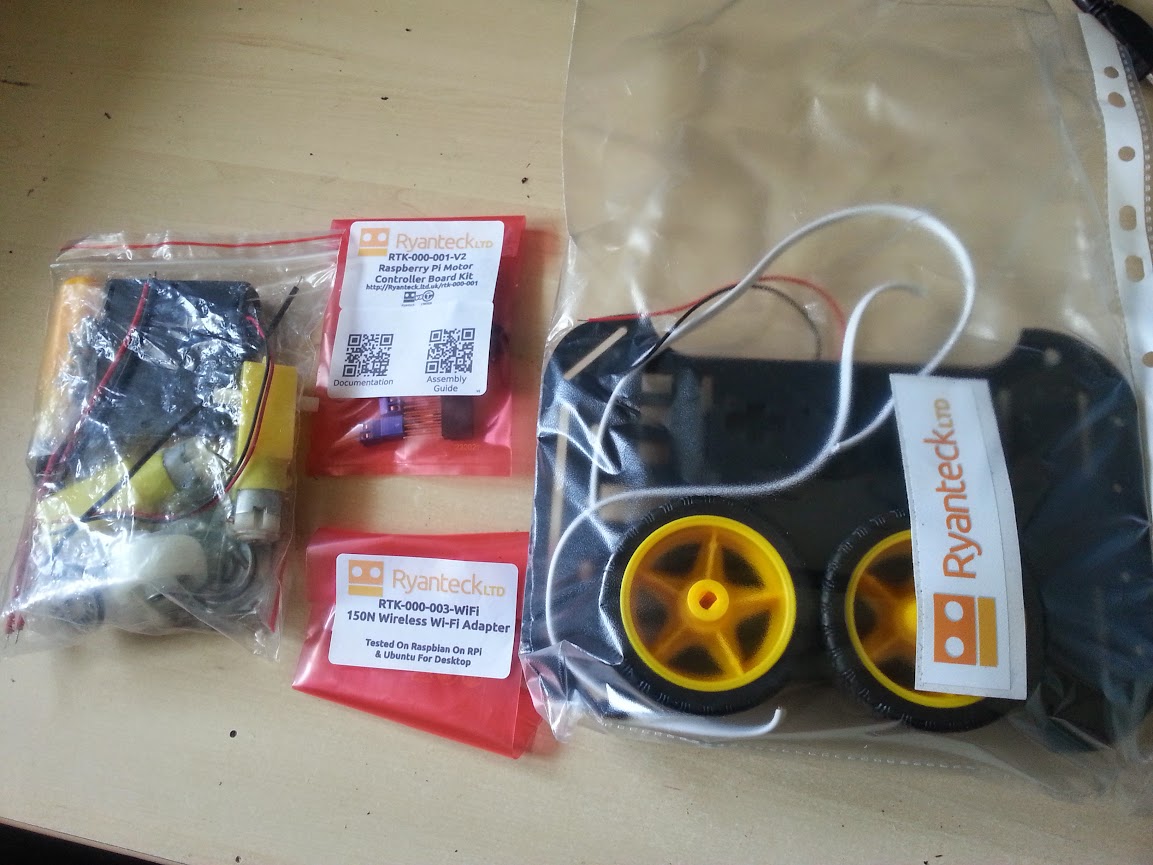 So… what’s inside the box?

Basically everything you need to build a robot! So, time to unpack. 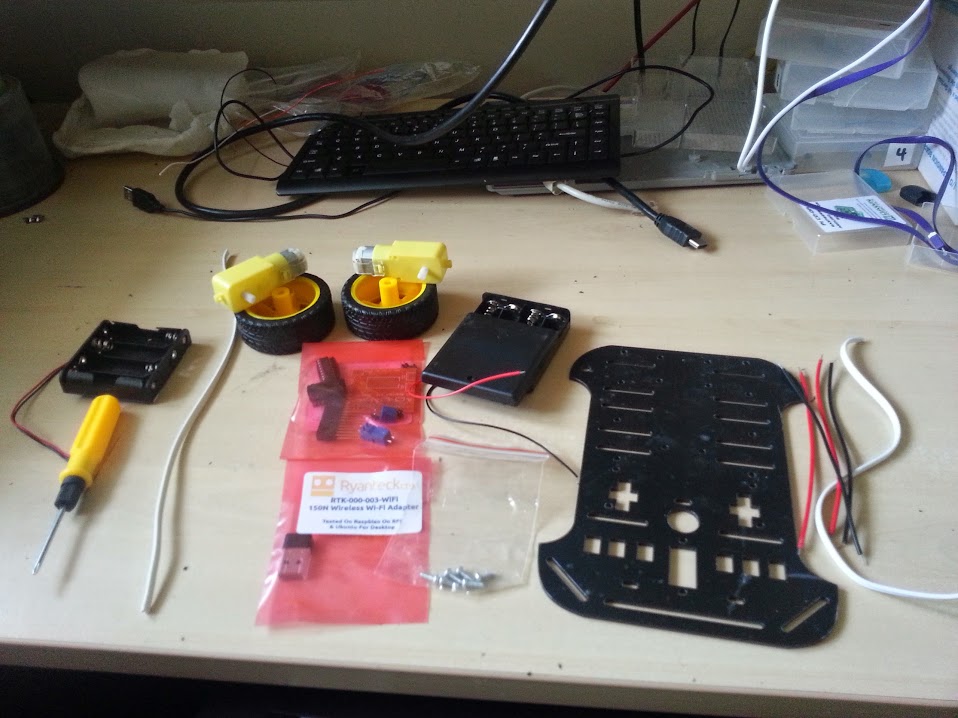 First thing to do was to solder up the motor controller board (see note below about the order you should do it in). 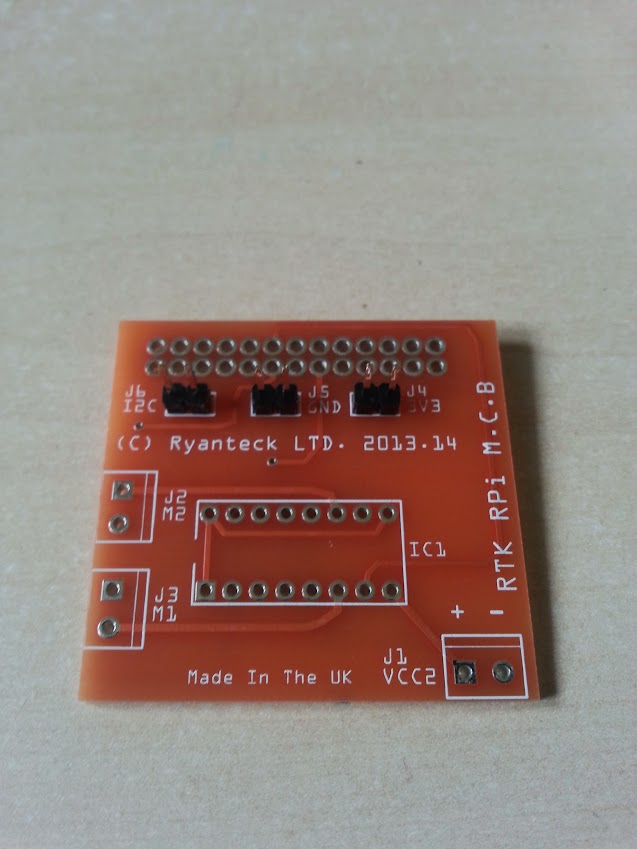 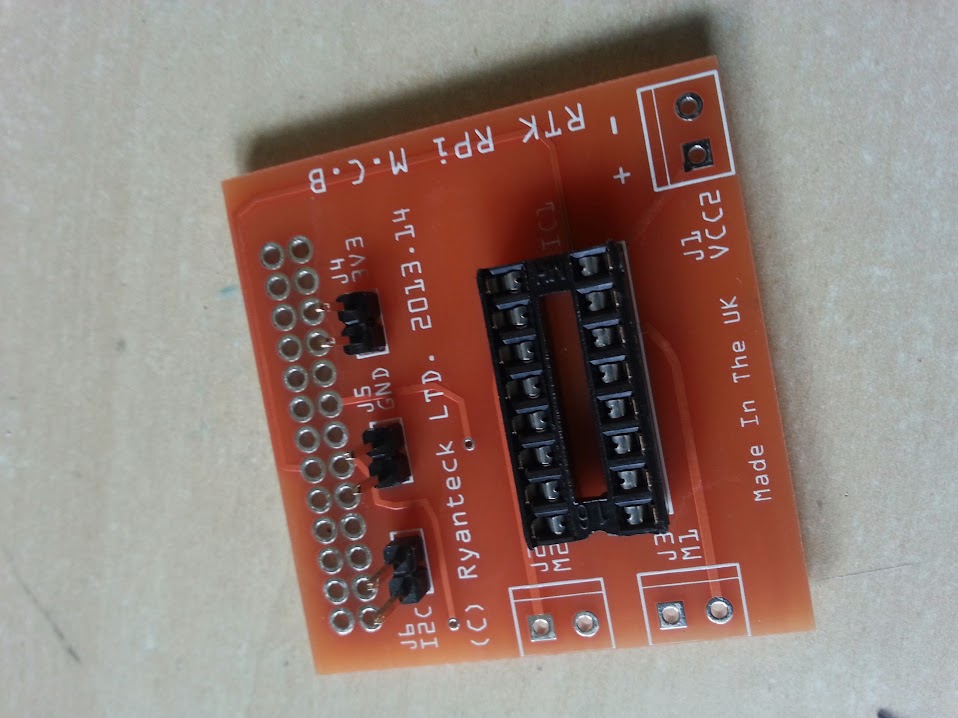 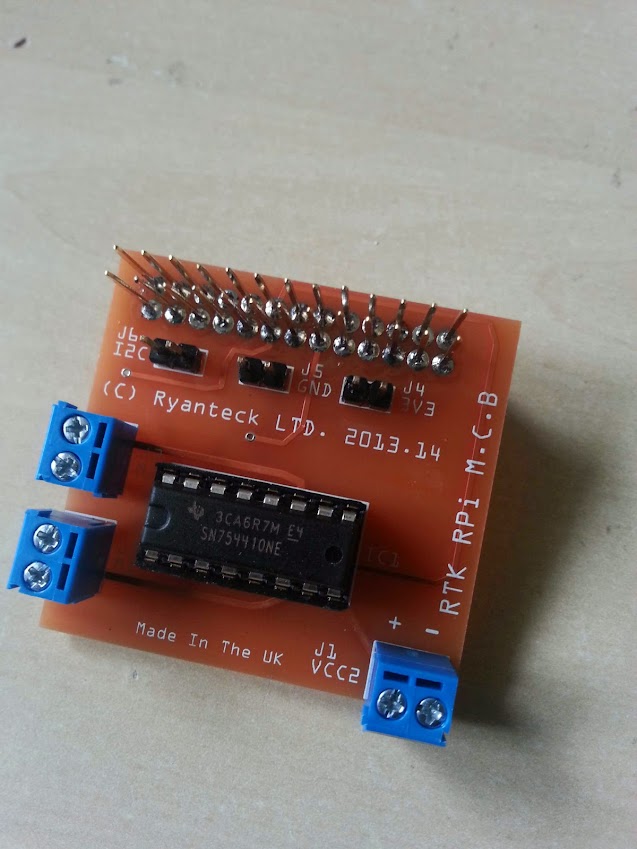 It’s a fairly easy soldering job that can be accomplished with a little patience and a steady hand. Some advice from the experience:

The next job was to solder wires to the motors. Now, I should have used sheathing here but I couldn’t be bothered to go back afterwards. Here’s my blobby soldering pictured below. I used a fair amount of solder because I wanted to ensure a decent size of joint. After that, the soldering part was done and I started to put the kit together. Ryan provides instructions on constructing the robot so I followed those. Here’s some more photos of the assembly. First step was to bolt the holders onto the motors: 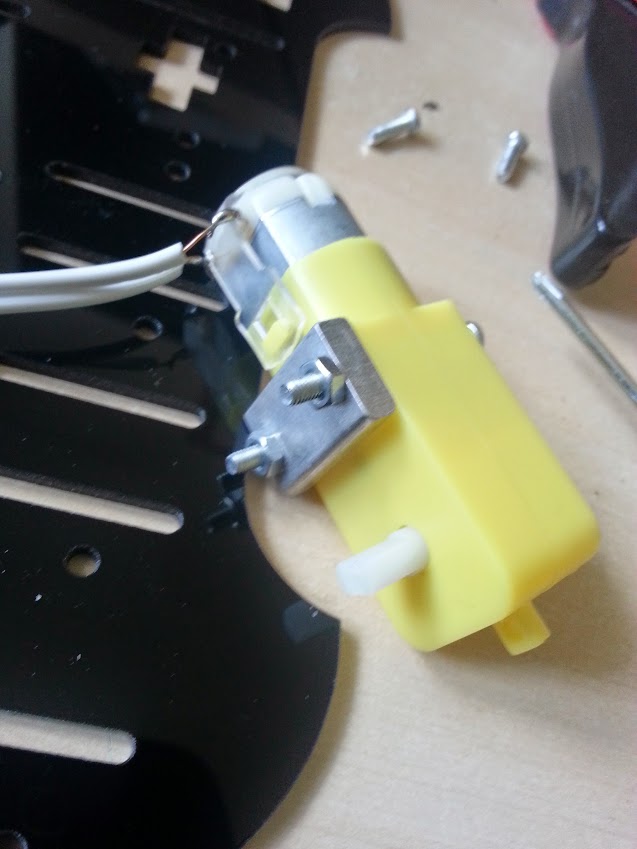 Then the motors were fastened to the chassis. Make sure that the spindle of the motor pokes out over the cross shape in the chassis to ensure that you’ve got them on the right way. I got it wrong first time (as the pictures below show): 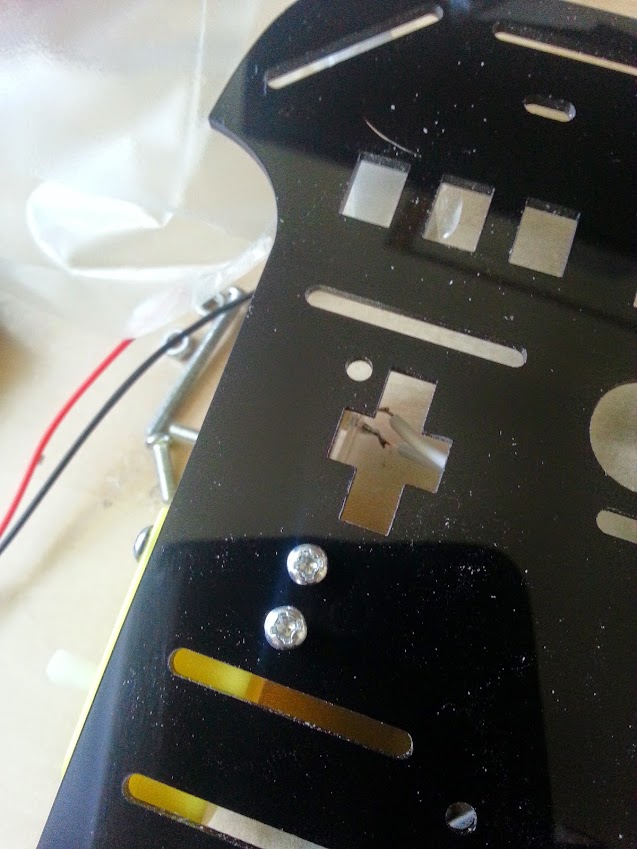 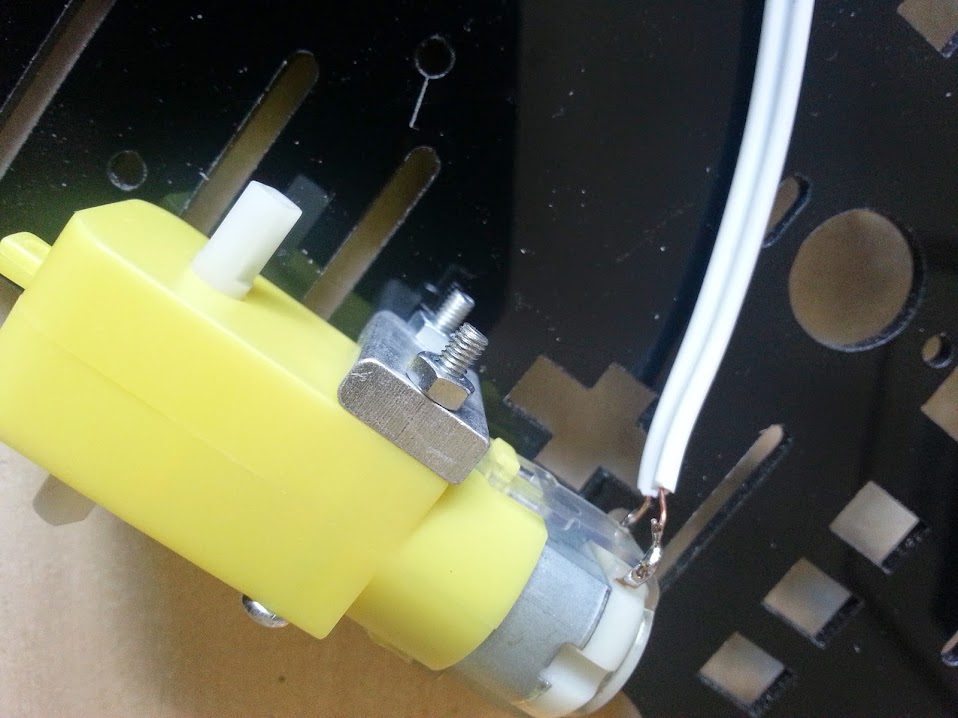 Here’s a picture of both motors fastened to the chassis (the right way round) with the wires threaded through to the other side. Don’t pull the wires too hard otherwise you’ll have to resolder them onto the motors! 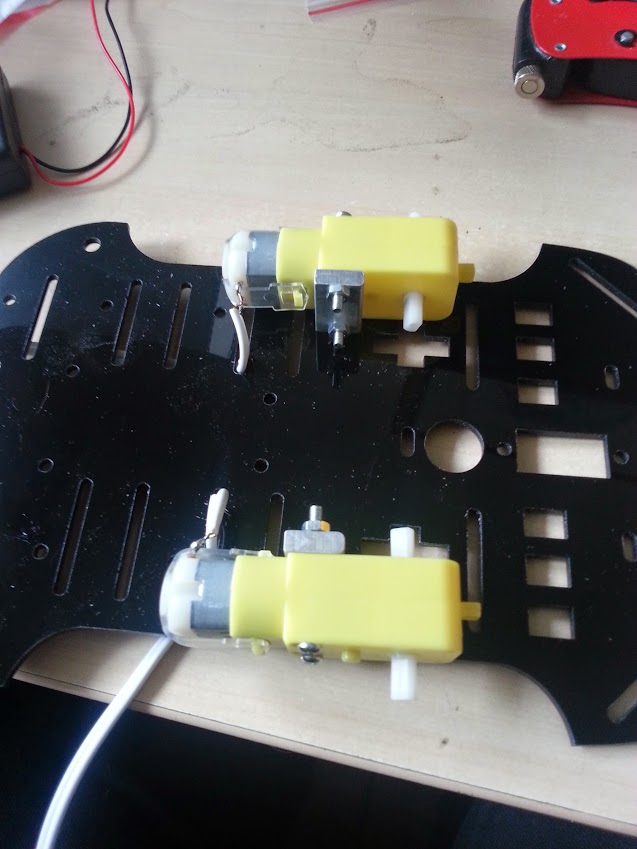 Then I had to attach the front castor and push on the wheels: 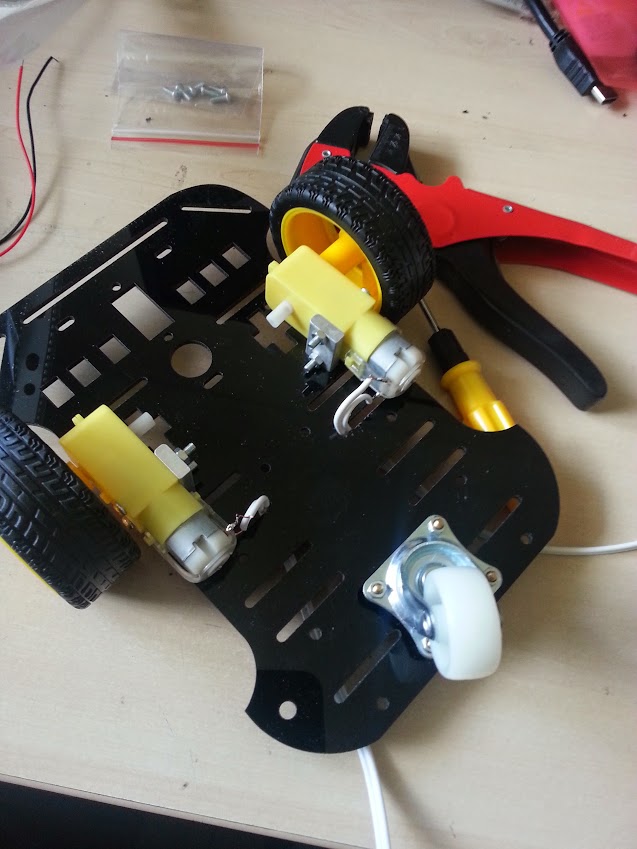 Now that the chassis was completed, I could move on to assembling all the pieces of the kit. The battery pack required batteries so I used some rechargeables I bought from Maplin. The wires from the battery plugged into the clearly-marked terminals on the motor controller board. The wires from the motors plugged into the other terminals on the board. Then, the motor controller board slotted onto the GPIO pins of my Raspberry Pi. (I used my red Chinese Pi, but it doesn’t really matter). Then, I put the Pi, the battery pack and a power source for the Pi (a 2000mAh phone charger which gives 1A out) onto the chassis. I also plugged in the WiFi dongle just so I could get a photograph of the whole thing. In reality, I had loads of cables plugged in so I could program it without connecting to a WiFi network.

I didn’t bother fixing anything to the chassis as I wanted to be able to dismantle the thing afterwards, but all you really need is a mix of blu-tack and cable ties. You do have to be careful that none of the cables snag on the wheels and you’re slightly restricted in the size of Pi power source you can use, otherwise that snags on the wheels. The smaller the better, basically. Here’s a picture of it all put together:

I booted the Pi up and it worked first time (if only life were always like that!). I then set about programming it. I used some examples provided by Ryan in his GitHub repository and adapted them into a simple test script. I later pushed the code back up to the GitHub repository – you can view it here to see how simple it is. I ran the script from a terminal inside X-windows:

A blank (PyGame) window popped up. I could then make the robot move forwards and backwards and turn left and right by using the arrow keys. This is a really easy way to get a basic, functioning robot working.

I know that Ryan’s working on a whole load of documentation that will help you create a much better control system which uses something called “SpaceBrew” to create a web interface. There will also be expanded documentation on setting your Pi up in the first place, assembling the kit and giving you basic programming examples in multiple languages, including C.

The next step I would take with this kit is to first of all get the SpaceBrew web interface working so I could control it from, say, a mobile phone. After that I’d probably work out how to turn the wifi dongle into an access point so I wouldn’t be reliant on a wifi network for connectivity. I’m not sure if the wifi dongle supports access point mode, so I’ll need to ask Ryan about that.

So, what do I think about the kit? First of all, I’ll concentrate on the price as it’s billed as a ‘budget’ robotics kit. The kit cost £33 from IndieGoGo (although that campaign has now finished). When Ryan decides to put it on sale again, he’s keeping the same price. For a pre-soldered version, he’s only charging an extra £5. To be honest, at £33 (or £38 for pre-soldered) you can’t go wrong. You get literally everything you need to build a robot – including the wire to connect it up.

Yes, for the £33 version, you do need some extra equipment (like a soldering iron and some solder) but it’s worth the investment if you don’t already have it and soldering can be fun! (No, seriously, I actually really enjoy soldering. Apart from the risk of minor burns it’s very therapeutic and does wonders for your nerves). If you just can’t face soldering, however, £5 to have it done for you is an absolute bargain.

The quality of the parts is top-notch. The chassis in particular is worthy of note. It’s a single layer, but it’s a big single layer. You can get everything you need to on that layer – it’s almost as if it were designed specifically for the purpose of using a Raspberry Pi (even though it wasn’t). The motors and wheels are standard parts but it’s good to see that there are no problems pushing the wheels on. You also get plenty of fixings to put the thing together – there’s nothing missing here. Maybe a few long cable ties thrown in might be a nice touch, but this is a budget kit, and for £33 I wouldn’t complain at all.

In terms of documentation and code examples, at time of writing this isn’t complete, but it is being actively worked on. Ryan’s got a huge framework for the documentation worked out and when it’s complete I think it’ll be the most comprehensive set of reference material ever written for a Raspberry Pi kit. The use of SpaceBrew is unconventional but, having seen a demo at a recent Jam, I can see why he’s using it – it just works.

So, if I were to give the kit a rating I’d have to give it a 10/10. I’ve been trying to find reasons to knock marks off and the lack of a few cable ties just isn’t enough to persuade me. So, for those who have the kit, be assured your money has been well-spent. For those who didn’t take advantage of the IndieGoGo, watch out for this kit to resurface and grab one while you can – if you want to get into robotics, there’s not currently a better way to do it for this price!