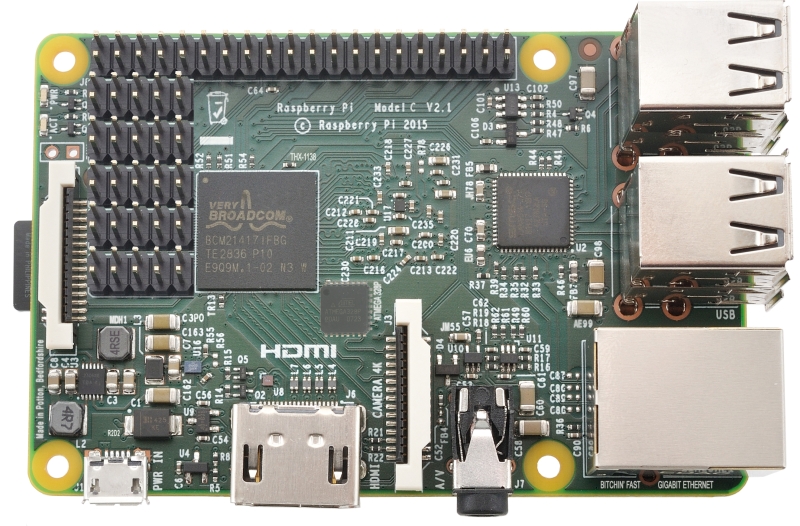 This new computer, with a fabulous 2GB of memory and an upgraded 8-core processor, is sure to grab the attention and imagination of the entire planet, if not the entire universe as we know it.

I spoke to Gordon Hollingworth at the Foundation who told me that:

“We figured people would have just bought the Pi 2 and we wanted to really mess things up in a wonderful way by bringing out yet another board”.

And that’s not all… the software engineers have been hard at work and a brand new desktop environment is expected in the next few days. I spoke to Simon Long who designed the new desktop:

“We’ve introduced a new task bar for this new Raspberry Pi. The task bar goes diagonally across the screen so everyone is happy. We got tired of people worrying themselves to death about the task bar that was at the top of the screen so we decided to compromise.”

James Adams, designer of the new board, agreed with me that this was the best iteration of the Pi yet:

“It’s the bees’ knees, basically. With the addition of the ATMega chip we’ve brought analog to the Pi. Admittedly this has raised the manufacturing costs of the Pi above a level we’re comfortable with, but it’s worth it just to make people happy.”

Eben Upton, CEO of Raspberry Pi Trading, was positively bouncing off the walls when I spoke to him at Pi Towers last week.

“The Pi 2 was good, yeah, but we didn’t like the idea of people getting too comfortable. The operating system was far too stable when we launched the Pi 2 – we felt that the best thing was to release the Pi C and really mess with people’s heads.”

The education team also gave their input on the new board. They’re just as excited about it as the rest of us:

“It plays the full version of Minecraft!” said Ben Nuttall.

“The weather station software goes too fast on it!” said Dave Honess.

“Guess I’ll have to learn how an Arduino works now…” said James Robinson.

Clive Beale refused to give me a quote but instead smiled sagely and nodded appreciatively.

Curiously, when I asked the hardware and software guys if Device Tree was fixed yet I was met with roars of laughter.

The full specs of the new machine are as follows:

Thanks to Alex Eames at RasPi.TV for collating that information.

Right now the only place you can get the Pi C is The Pi Hut. It was decided that only one lucky supplier would be allowed to sell the new board – according to Liz Upton it was “an experiment” to prevent leaks. The price is £30, which is the same as the Raspberry Pi 2, which is just fantastic.

So, what do you think of the new model? Can you see it blowing people away? Or is it a Xenon-flash in the pan?

Click on the image above (or here) for a higher-res version of the photo.

Get yours from The Pi Hut – quickly before they sell out!

Find out more from RasPi.TV here.