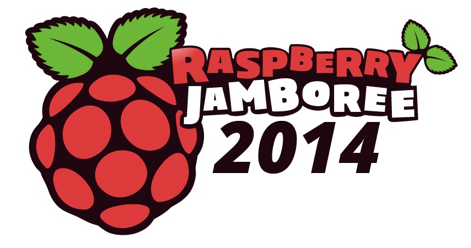 After a lot of procrastination and general inability to make a decision, Tim and I decided to go the Jamboree for the Friday. So, it was an early (and I mean EARLY) start for us both. We woke up at 4.30am, I then picked Tim up and we headed for Milton Keynes Central train station. It was well worth the driving time to go to MKC as it ended up being half the price for half the travel time in comparison to going from our local railway station, Sandy. The journey up, courtesy of Virgin, was smooth an quite enjoyable and we pulled into Manchester at about 8.30am. Then, a 20 minute walk (during which our sat navs completely failed to be helpful and then pulled themselves together just as we were starting to get a bit annoyed!)

We got to the Manchester Central Conference centre and met up with David Whale (@whaleygeek) who had also got there early. Then after a short break to eat a snack we were in, checking in at the registration desk.

We headed backstage to see if any help was needed and did a few bits then before we knew it we were starting. We stayed in the main hall for the first set of Slices of Pi (short presentations).

Alan O’Donohoe gave a short intro and welcomed us all to the Jamboree. 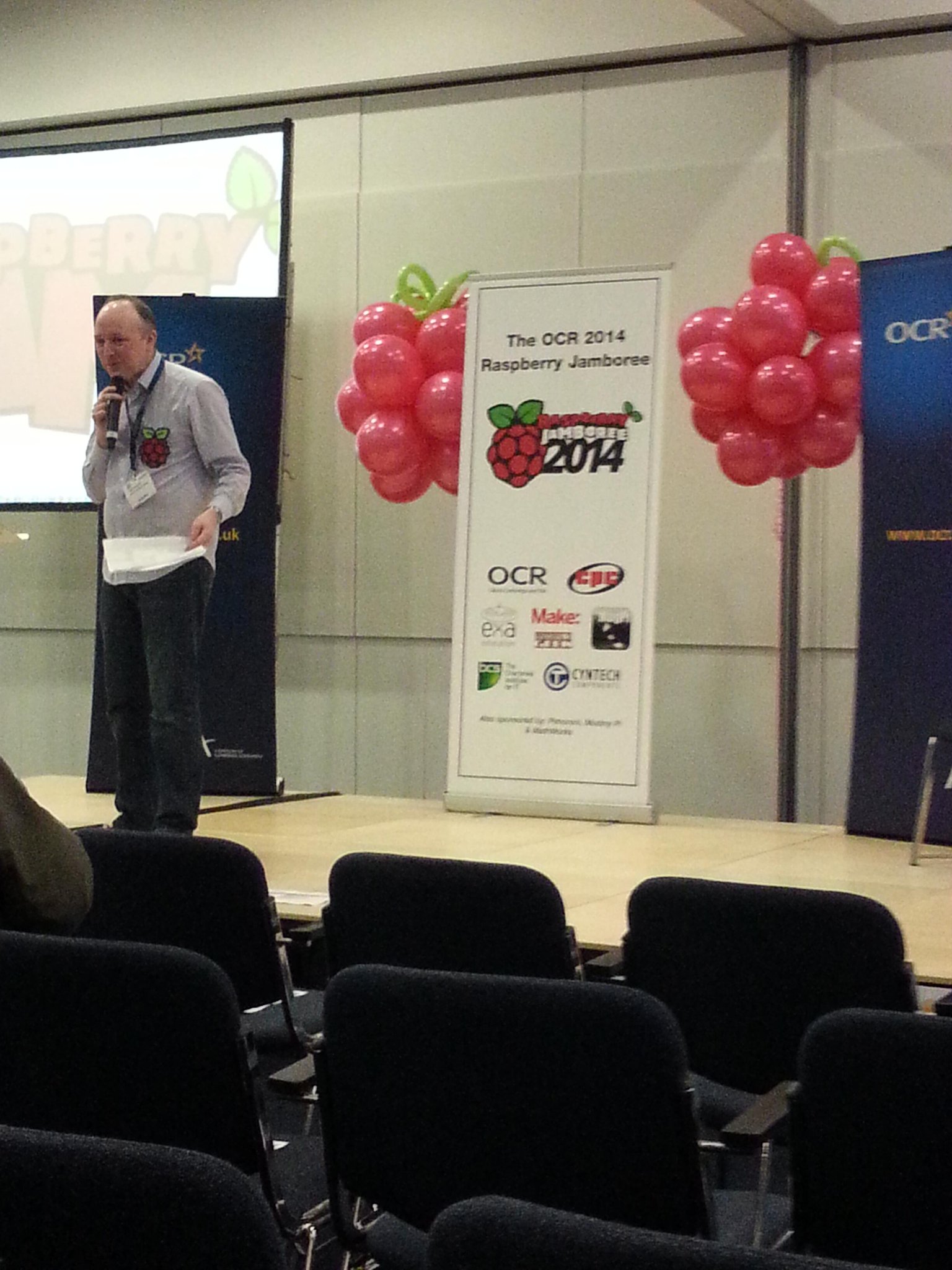 First up was Ben Nuttall and Carrie Anne Philbin from the Foundation. They talked about the challenges of getting the Pi into the classroom and the challenge of the new curriculum – a not-surprising recurring theme at the Jamboree. They announced that the Foundation was re-developing it’s website and giving it a much more education-focused feel. They also announced that the Raspberry Jam website would be merged into the main Foundation site with lots of cool, necessary features. This is great news for Jam organisers and attendees alike. 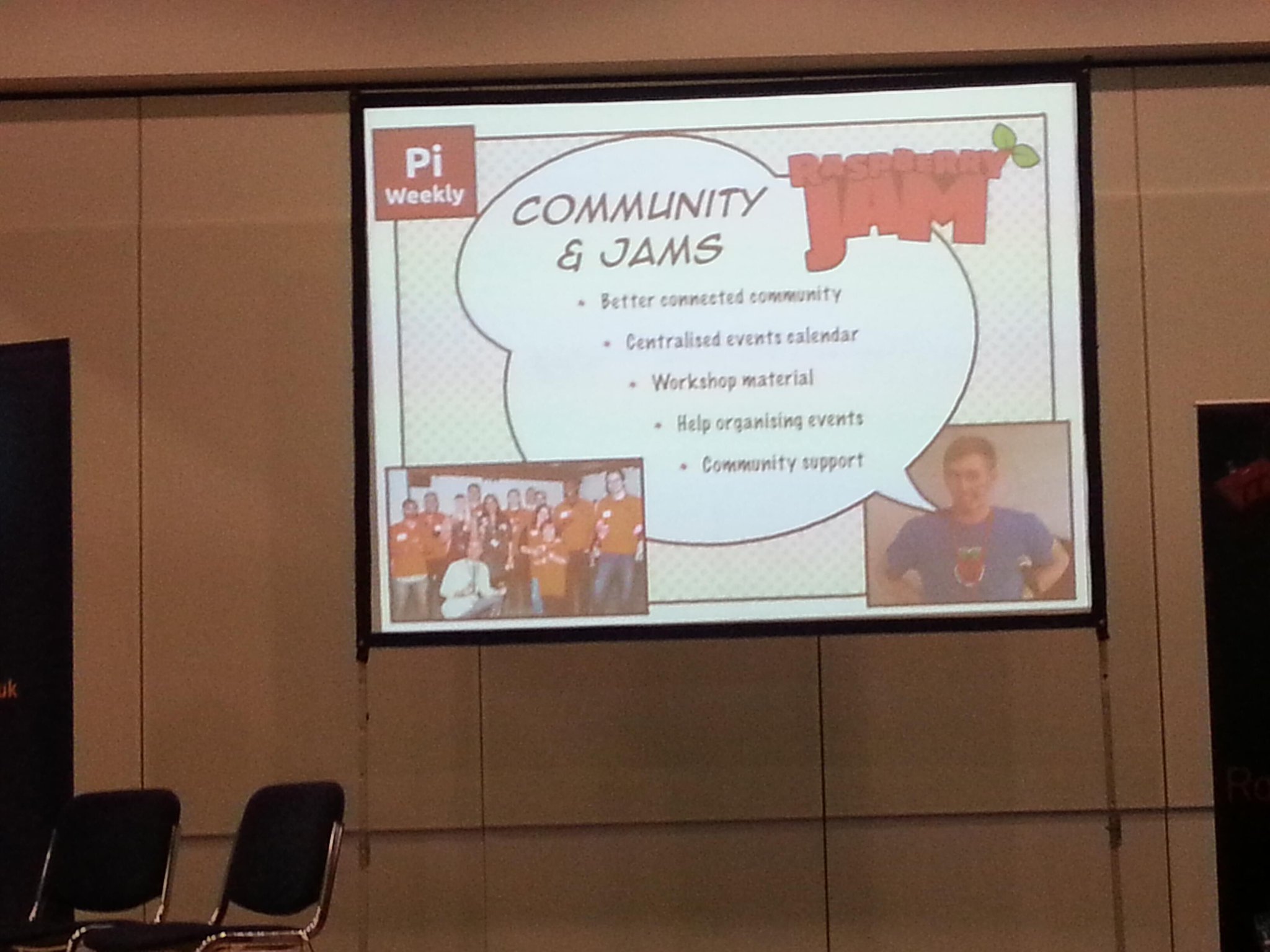 Ben and Carrie Anne also announced a Call to Arms – an open invitation for people in the community to get involved with the educational aspects of the Pi. 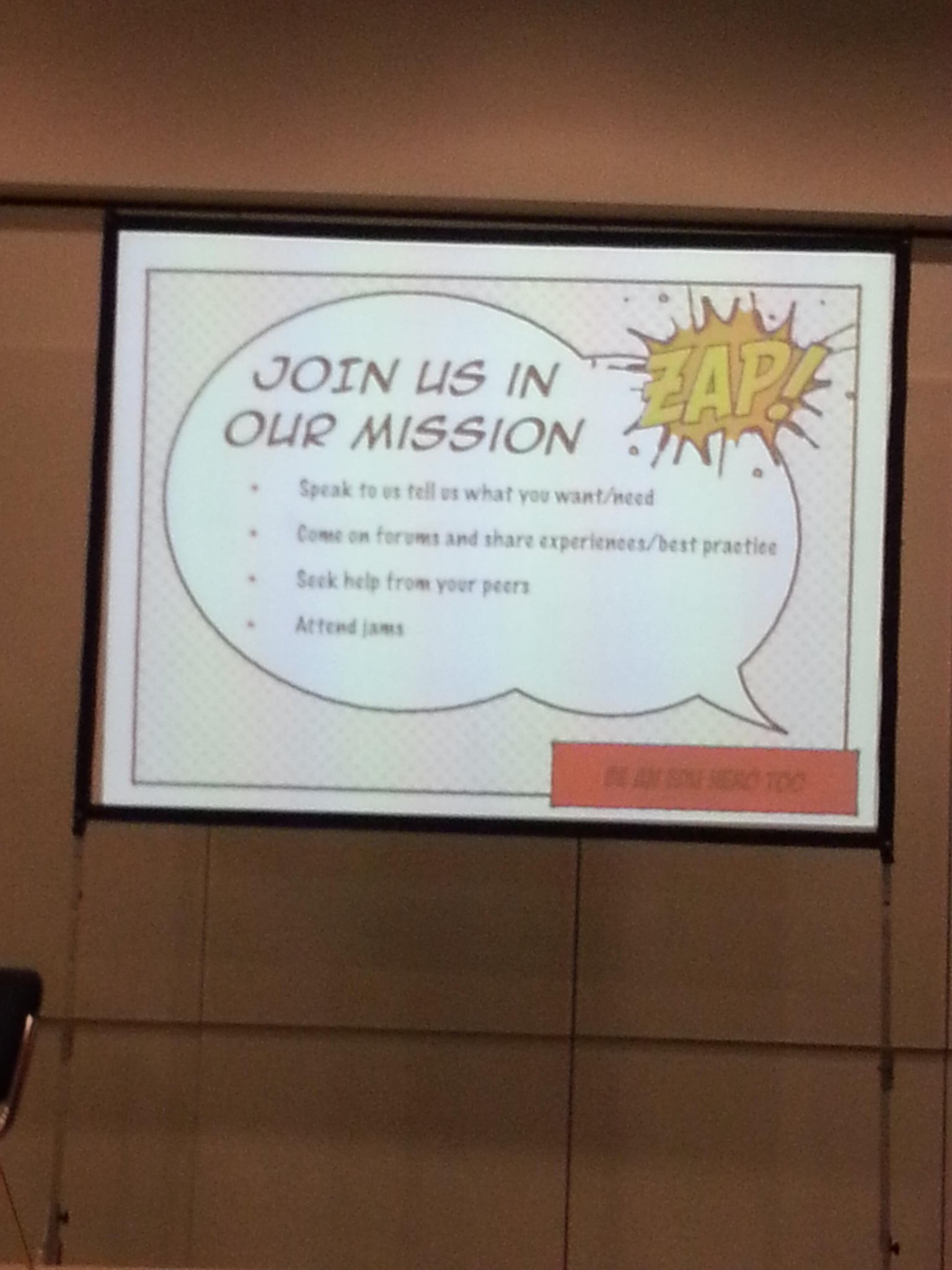 Alan O’Donohoe came back on the stage after this and talked to us about how Raspberry Jams got started in the first place. Fascinating case study of the Preston Raspberry Jam, which was a much more free-flowing Jam than the Cambridge ones, and concentrated more on getting people together in a room and just having them hack away. Interesting stuff. 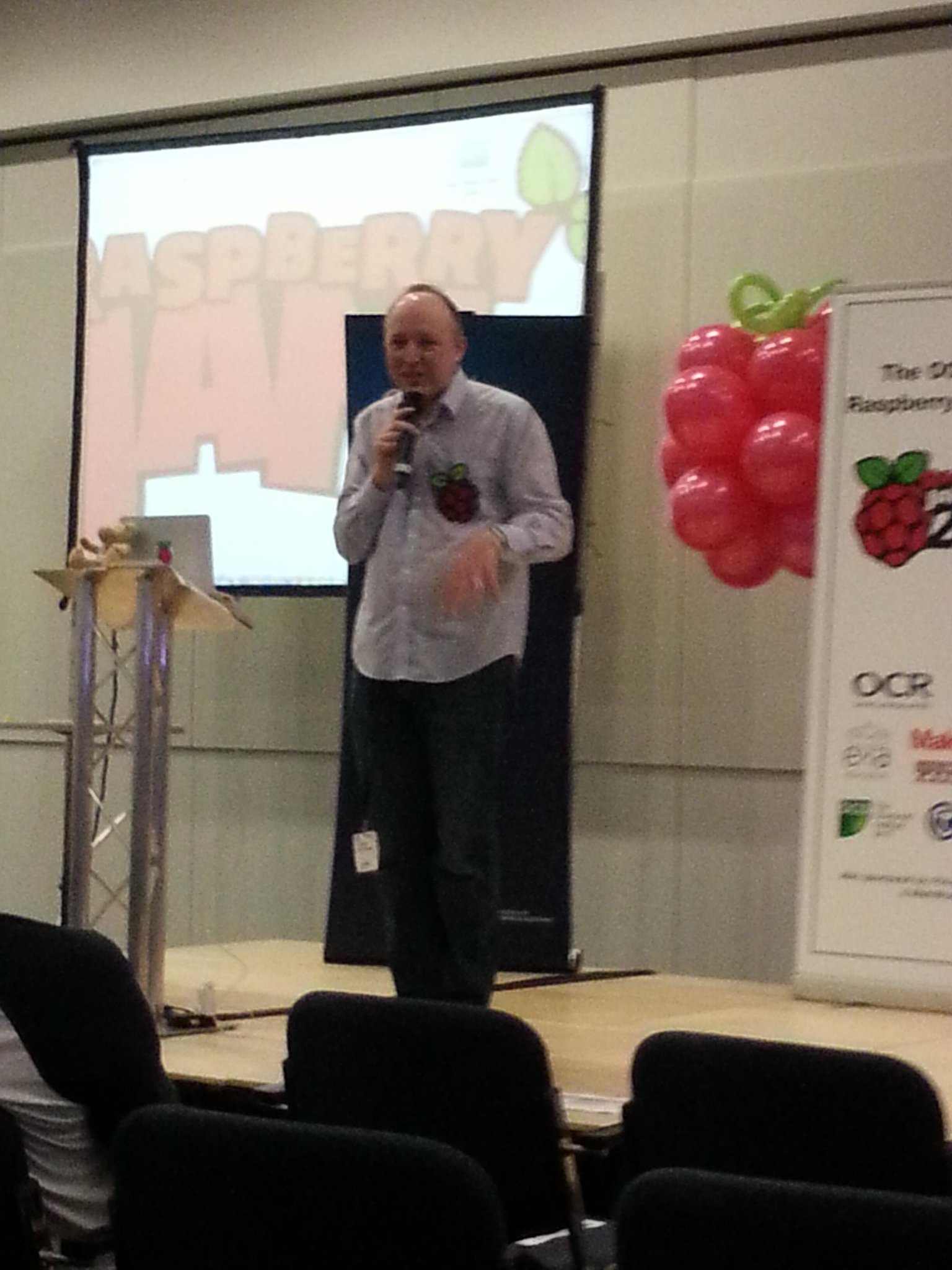 Next up was Matthew Timmons-Brown, a familiar face from CamJam, a 14-year old who is the most natural young presenter I’ve ever seen. He spoke about everyone’s favourite topic – ROBOTS. He also spoke briefly about his YouTube channel and the success he’s had with it – almost a million views! 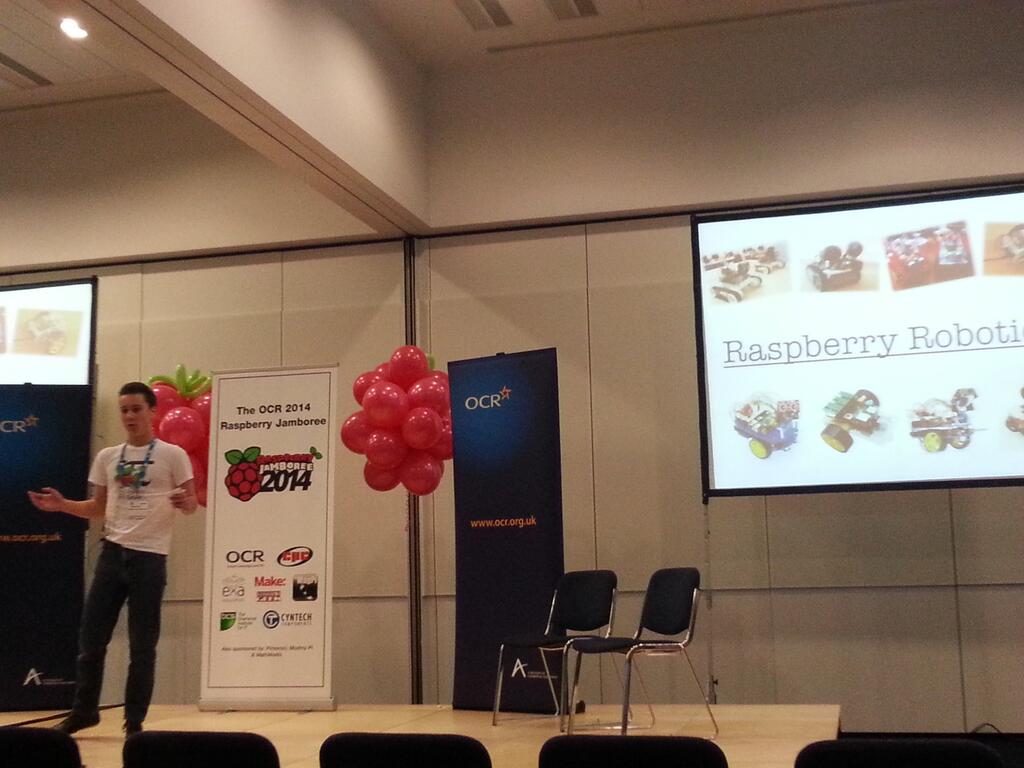 There was then a short break before the next session and myself and Tim had to hoof it through the main Education conference space to out near the main entrance. We headed for “Central 8” to watch the Raspberry Pi in Class panel. The panel was chaired by Dawn Hewitson and featured a collection of teachers and consultants talking about what it means to have the Raspberry Pi in an educational setting. There were some great questions here, mostly about getting started with the Pi and how to get children enthused using it.

I wrote down loads of quotes from the session, so here goes:

After the panel (which was definitely a highlight of the day) I headed back into the main hall while Tim headed for Tony Goodhew’s analog I/O guru talk. In the main hall, I watched Andrew Robinson talk about the past, present and future of computing. Knitting is, apparently, like programming. I had my doubts, but indeed if you write out a knitting pattern it looks like computer code! Just goes to show how many activities have an algorithmic element. 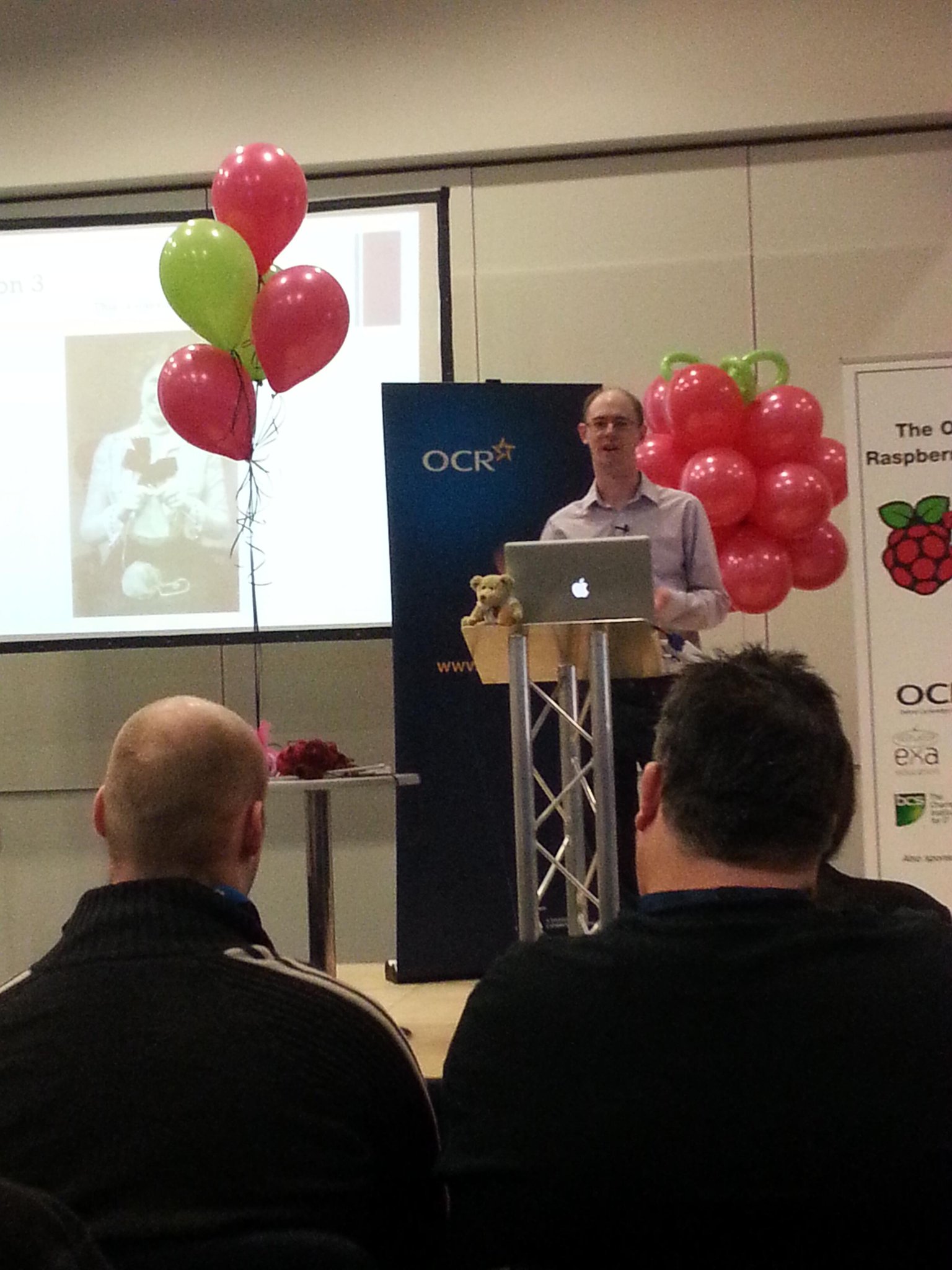 I should’ve moved those balloons after Andrew’s talk – pain in the bum! Andrew’s talk was a little esoteric and abstract at points and I must admit to getting a bit lost in the middle, or I was just tired.

Anyway! After that talk, I headed back into the Education Innovation exhibition to have a look around with Tim. Had an excellent talk with the guys on the Fuze stand. I’d made a point of wanting to see the Fuze in person as I didn’t like it much from pics online and in magazines. The slope of the keyboard was a cause for concern as that kind of thing can cause RSI, but I didn’t want to to talk about something that I hadn’t seen in the flesh as it were. To my surprise, the Fuze is a lovely piece of kit.

The case is made of aluminium which gives it an industrial, and retro, feel. It also means it will take a fair amount of punishment and keep on ticking, protecting the Pi inside. The GPIO is broken out to some handy female headers and the case has a built-in large breadboard area for that kind of experiment. All the Pi ports are brought round to the back. The only slight downside is that the SD card is still accessible, but they are thinking of allowing the Pi to be mounted further back to hide the card – a great idea. They also spoke about their wish to implement some analogue inputs and output on it as that’s something the Pi is missing currently. One of the exciting things we saw was an example of FuzeBASIC which has been developed by Gordon Henderson (based on his Return to Basic, or RTB). It was thrilling to see a language that so many of us started out with making a return to the Pi and it’s one of the things that should encourage schools to invest in the Fuze. Now, the price (at roughly £150) is a bit on the pricey side but I think that’s worth it – the build quality and the strength of the case is so protective of your Pi that it takes away some of the “Oh my goodness, but it’s only a fragile little circuit board” fear that some teachers feel.

We also dropped by the Computing at School stand where we talked to a couple of people about someone coming to the May 10th CamJam to talk about the new curriculum. We’ve got a good contact there and we’ll be chasing them up in the next week or so.

After lunch, we split up again. Tim returned to the main hall to hear some talks and I headed to the panel room once more, this time to watch a Robotics panel. This panel featured Matthew Timmons-Brown (chair), Andrew Mulholland, Jason Barnett, Ryan Walmsley and Andrew Robinson, all experts in robotics. The lack of questions was quite disappointing and the panel was generally self-driving, but there was some good stuff here. A lot of the questioning that there was revolved around getting robotics into classrooms, and generally getting started in the arena of robots. I recorded the session on my phone and it’s currently uploading.

The final hour of the Jamboree was really interesting as myself and Tim were on a panel ourselves. This one was all about organising and running Raspberry Jams. Also on the panel was William Bell (who organised the CERN Raspberry Jam), Ben Nuttall (who started up the Manchester Raspberry Jam) and us two. The chairman was David Whale (STEM Ambassador and organiser of the Harlow Jam). As I say, it was really interesting and I think the Jam organisers learnt a lot from each other. The CERN Jam drew a lot of kids from nearby schools; the Manchester Jam was an informal bring-and-hack type Jam and the Cambridge one is a more formal, organised Jam (primarily because of the size). Cambridge is undoubtedly the largest Jam in the country, but we were able to offer some insight into starting small and growing bigger. The panel session was recorded by Clare Macrae, so hopefully it will get uploaded for any of you who want to know about running your own Jam.

We then headed back through the main hall to help out at the Birthday Party. The birthday party had been organised by the brilliant Lisa Mather who had organised all kinds of party games and bags of swag. These bags of swag needed packing with said swag and so for the next 45 minutes or so, we stuffed light green bags with cool stuff. The party itself was a triumph – party games, food, drink (non alcoholic) and lots of chatting and celebrating the birthday of the Pi. 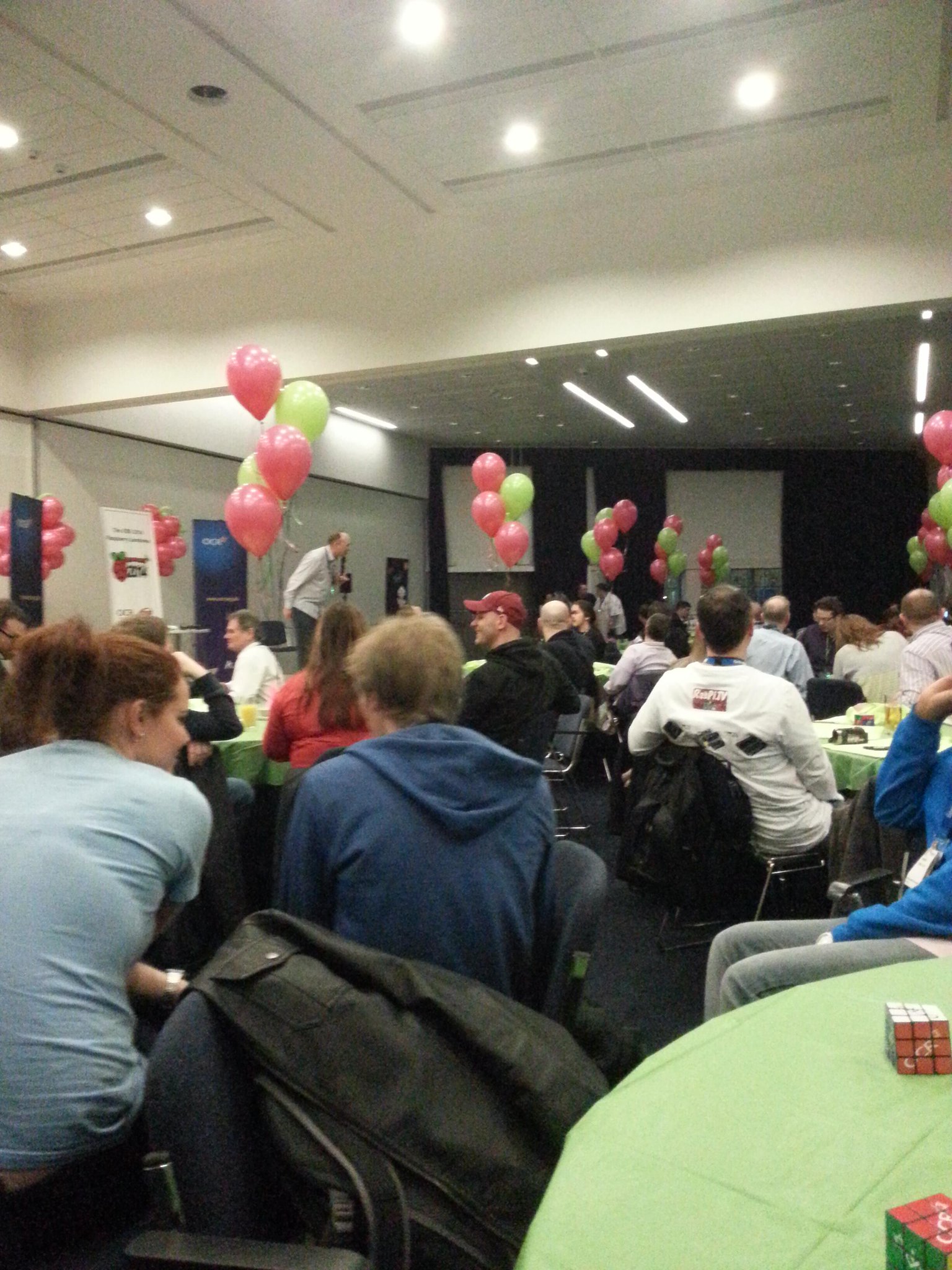 I would hate to have to organise an event like this – and Lisa should be commended for her work in getting it to happen! The only annoying point was that I missed out on the opportunity to say hello to her – she was busy, then I was busy, then I lost her in the crowd, so annoying when that happens!

One of the nice things that happened was that the IET awarded an engineering in education award to the ridiculously talented Amy Mather. 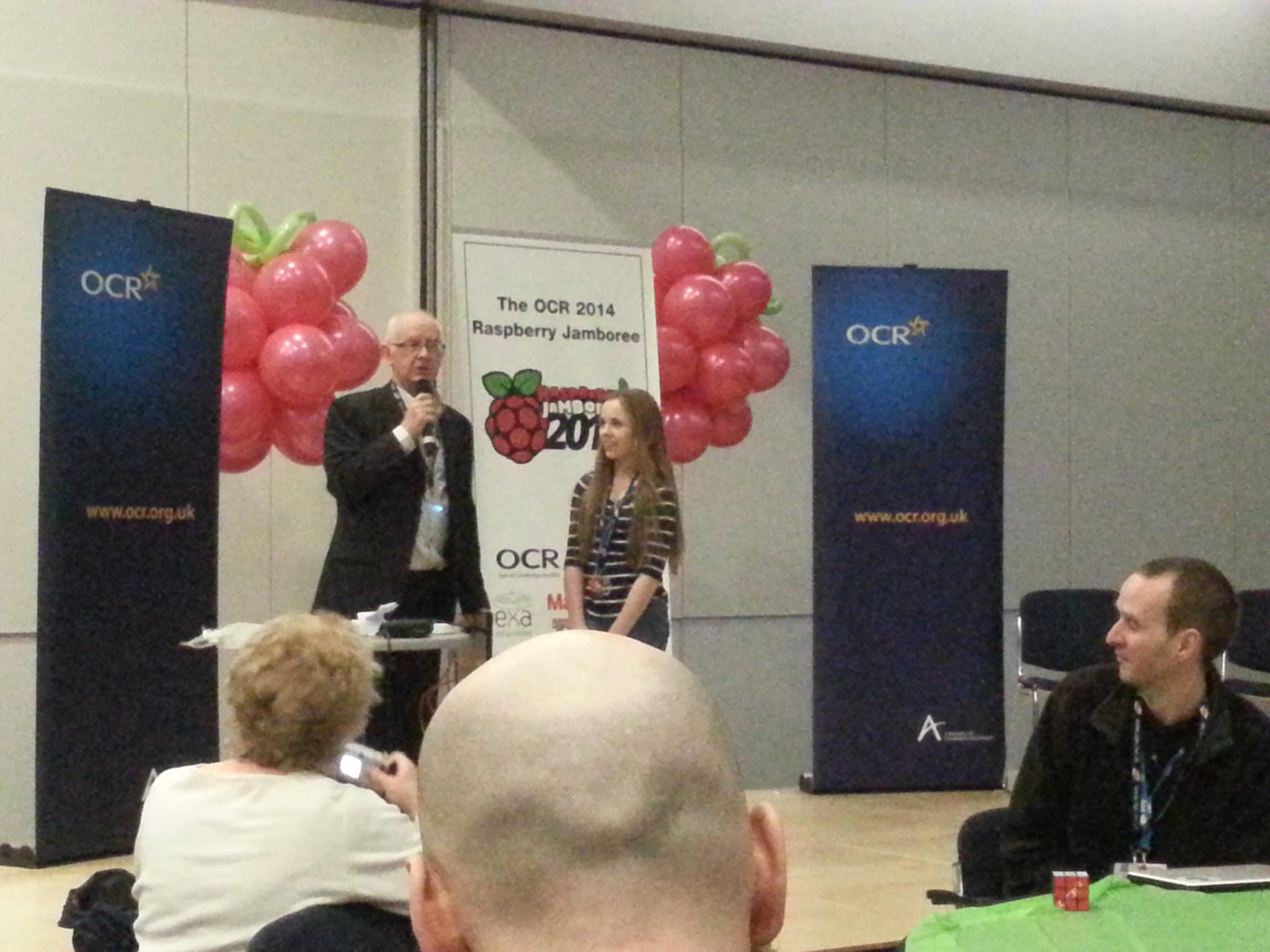 At one point I was top of the leader board on Jason Barnett’s fun tin can alley game. There was a board with Pi logos on it with LEDs and light-dependent resistors. You had to use a mini joystick and button to control a laser to activate the LDRs and turn the LEDs off. Great fun. Other games included a huge Raspberry Pi logo with big light-up buttons on it which was a reaction game. Plus there was pin-the-leaf-on-the-raspberry, a Minecraft treasure hunt, a matrix display Snake game and a Raspberry pinatta. All great fun, really 🙂

We had a pass-the-parcel game where you could win a prize. I came away with a Babbage Bear – which I’ve given to my wife as a thank you for letting me go to the Jamboree 🙂

After the party, we headed to the Rain Bar for the after-after party. I had an awesome burger and took this quick panoramic photo:

It was a bit tight for space, but the atmosphere was good. It was suggested by Liz Hardwick to come here and, despite the space restrictions, the beer was good, the food was better and it was a nice way to end a fantastic day.

Next year, we want to go up for both days (if there are multiple days, anyway!).

Big thank you to Alan O’Donohoe and Lisa Mather for doing loads of the planning and organising, and a shout out to everybody who helped make the event what it was – a great big geek-out for lots of geeky people being geeky and getting together to chat about that most brilliant of inventions: the Raspberry Pi.