In my opinion, the weakest part of the Raspberry Pi is the use of an SD card on the board, and more specifically the way it sticks out by approx 1.5cm. Most of the cases (apart from the Cyntech case which now has a handy little cover) do not protect this most fragile part of the system. The reasons behind the choice of the SD card slot over a micro-SD card slot were a) manufacturing cost and b) the availability and cost of the cards themselves. For a mass-market product aimed primarily at education, this kept the cost of buying the Pi and media cards to the lowest possible.

I’ve personally found that even with an intact SD card slot, the connection between the card and the slot pins can be a bit a hit-and-miss. Having recently tried to demo the PiPodCorder at work and found that the SD card was slightly loose, I decided to buy another micro-SD card adapter having previously been so pleased with the pIO adapter from Quilix. This time, I decided that I wanted to see what Adafruit had to offer with their Low-profile microSD card adapter.

So, here is a review of both adapters and comparisons between their various merits.

You can pick up this adapter from BitCrafts for approx £8 plus a small shopping charge. You can also order from ModMyPi for £7.50 and you can sometimes find them on eBay for slightly less (although you do have to be careful that you’re ordering the Quilix one not one of the clones).

Let’s have a look at the adapter: 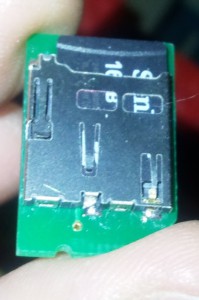 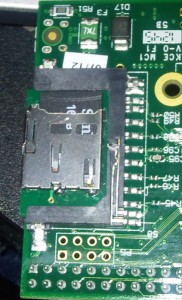 As you can probably tell by now, I think this is a really great adapter. In terms of how it fits into cases, I’m happy to report that it works with all the cases I own, which are: ModMyPi, Adafruit, Cyntech, SB Components.

You can get this adapter for £5.99 from Phenoptix or elsewhere for around the same price.

This adapter is loaded from the outer edge, i.e. towards the Pi and is push-in, push-out. The microSD card sticks out of the long edge a good 1-2mm, roughly the same size as the raised notch on the card. This allows easier access than the Quilix one, but unfortunately means more of an overhang and it is more susceptible to accidentally springing the card out of the slot. The adapter board itself sticks out another 1mm from the end of the Pi. The depth of the card is virtually identical to the Quilix adapter. It definitely has a larger footprint than the Quilix, which, along with the overhang of the card itsel does give some difficulties with cases. It’s fine in the Adafruit case (unsurprisingly) and the ModMyPi case. However, it’s not possible to close either the Cyntech case or the SB case properly when using this adapter. Here are some shots showing the adapter in use: 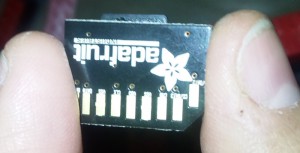 Both adapters offer much greater protection for your operating system media than using a standard SD card. There are two main differences between the adapters: accessibility & size. If you need an adapter that will primarily allow easy swapping of the microSD card, the Adafruit is probably the better option, although the Quilix is easy too. Size-wise, the Quilix wins outright due to the high level of compatibility with the four cases I have. I should say I do not own a Pibow case but have read accounts that the Quilix adapter does fit (depending on tolerances in the Pibow sheets) but the Adafruit adapter does not fit.

The slightly higher price for the Quilix adapter is definitely worth it, in my opinion, and I wholeheartedly recommend getting one for your Pi and switching to microSD cards.