This project has been in progress since I first received my Raspberry Pi last July. Until now, I just haven’t had the time to record video.

The Picorder is a Pi/Arduino combination taking readings from 2 temperature sensors, a hall-effect magnetism sensor and an ultrasonic distance sensor which it then displays, with the aid of a Python script, on an LCD display. The Pi also displays it’s own IP address(es) which can come in useful sometimes!

The scripts for the Picorder are held on my GitHub redwing-pi repository. The main driver Python script is pipodcorder4.py.

This project is also detailed on my project page at Ryan Walmsley’s Pideas.co.uk site, which is a fantastic place to add your own Pi project.

Here’s a photograph of the Picorder: 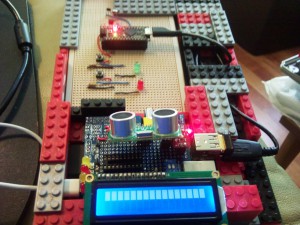 For a walkthrough of the components watch the following video:

See the device in action below:

I will be posting more technical details of the inner workings, code and such like, in the next week, so keep an eye on the blog using the RSS feed or subscribe via email at the top of the screen.

All the articles about, or related to, the Picorder are available here.

7 comments for “The RaspberryPi Tricorder – the Picorder”