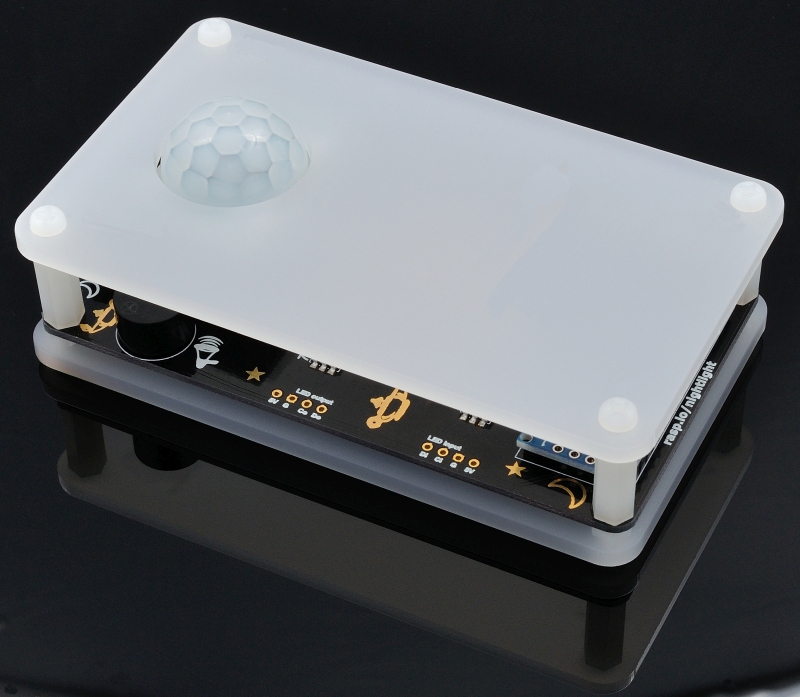 Alex Eames, of RasPiO, has just launched his latest Kickstarter. This campaign is for the RasPiO Night Light. This one is not controlled by a Raspberry Pi, but because of that is cheaper, more stable and is pretty much plug-n-play.

The Night Light is controlled by an Arduino nano clone and is a kit which features:

In the pictures below you can, first of all, see the RasPiO Night Light circuit board as it comes in the kit with the LEDs pre-soldered and, lastly, you can see the main board fully populated as it will appear after assembly. 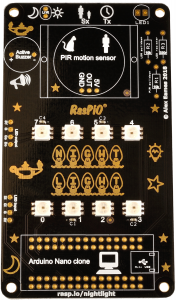 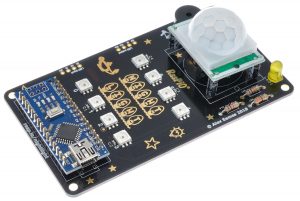 You will need to put the Night Light together yourself (apart from the surface-mounted components such as the LEDs which are helpfully pre-soldered onto the PCB) so you will need a soldering iron, solder and cutters. This is pretty simple and Alex has promised an instruction guide and assembly video for those who are wary of such kits.

You will also need to program the Arduino clone with either the example sketch or alternatively change the sketch so that it does what you want it to do and then flash it to the board. Alternatively, if you don’t fancy messing around with the Arduino IDE, Alex will do that for you for a small fee (£3) that you can add to your pledge.

Alex sent me a semi-assembled and pre-programmed RasPiO Night Light to try out. All I needed to do was to put the case around it and plug it in – ideal for a beta tester!

Putting it together with the case was very simple, and I just followed some instructions Alex sent me to get the fixings in the correct order. Obviously, I didn’t need to program it, but being an Arduino nano clone, this should be very easy from the Arduino IDE.

First of all, I needed to find a power supply for the Night Light. Fortunately, I’d picked up a Poundland USB ‘wall wart’ the previous week and so I used that and the included USB cable. I found I needed to adjust the potentiometers slightly for my lighting conditions as, to start with, the Night Light refused to work. A little tweak with my fingers, however, cured all ills and suddenly I had a working Night Light. As Alex says, the LEDs are bright enough to light your way at night without being so bright that they wake you up!

So, my beta testing began. This involved propping the plugged-in Night Light up against my landing wall and waiting for night to fall. Wouldn’t you know it, I needed to get up in the middle of the night. So, I wandered out onto the landing and, hey presto, the Night Light lit up and showed me the way.

The following day, I wanted to take a look at the example sketch to see if I could figure out the code. Alex let me have the Github link to the repository and I found the sketch. It is, of course, written using Arduino’s C language. Don’t let that put you off! It’s really clear code that is commented on almost every line. I needed to install the FastLED library: a quick Google found this tutorial on the Arduino website. Modifying the code to display a different colour, or different brightness, involves simply changing some values. However, with a little bit of knowledge, you’ll be able to alter the code to your own purposes. Arduino’s variant of C is a good piece of knowledge to have, so consider it a learning experience if you have no experience already!

The Night Light has been doing constant duty on my landing for a few weeks now. I’ve not needed to reboot it or change it at all since I plugged it in again. This is essential for such an appliance. I imagine it pulls very little power, so leaving it on all the time is fine, although switching it on or off at the plug is okay too, thanks to it having no SD card to corrupt! 😉

All in all, I highly commend Alex for a well thought-out and good-looking product.

Alex told me something very interesting about his reasoning behind not using a Pi for the project. First of all, an Arduino nano clone is a heck of a lot cheaper than even the original Pi Zero. This makes it affordable for campaign backers. Secondly, when he tried an early version of his carrier PCB with a Pi Zero W, the wireless interference from the W caused the PIR sensor to malfunction – not what you need at night when all you need is a little light on the way to the loo! He also tried a Wemos board, but that had the same problem!

I think he’s made an excellent choice with the Arduino – it is technology that most makers will have experience with, or at least have heard of. Of course, it’s the C language, but this is not beyond most makers. Vitally, it handles power loss as well as any other Arduino – because it uses flash memory, the Arduino just springs back to life without the user worrying about damage or corruption to the file system.

Alex previously gave us several Raspberry Pi-related products. These included the brilliantly-conceived ProHAT, the helpful-as-heck Analog Zero, the Duino and the indispensable GPIO Zero ruler and GPIO reference board Portsplus. All these projects have delivered either on-time or ahead of schedule if they’ve been crowdfunded. They’re always high-quality products, and often come with extremely well-written documentation.

The Super Early Bird price for the kit is £21, rising to £25 once the early bird has finished. For £38 (rising to £45), you can have a custom-etched acrylic plate for the top of the Night Light. For those who just want to show their support, there are lower pledges for just the PCB and for just a new Portsplus.

This may seem expensive for a nightlight. You can pick up simple plug-in ones for a lot less. However, this has a lot more fun attached to it. First of all, it’s a kit and part of the pleasure of owning a kit is to put it together. Secondly, it’s hackable – add components, change the code and personalise the product to do what you want to do with it.

Even though I’ve already got the beta-test version Alex sent me, I will be backing the campaign anyway as a) Alex always delivers and communicates well, and I like a nice campaign to follow and b) I need another one for my Den (the shed).

Find out more and back the project

You can read more and back the project here.