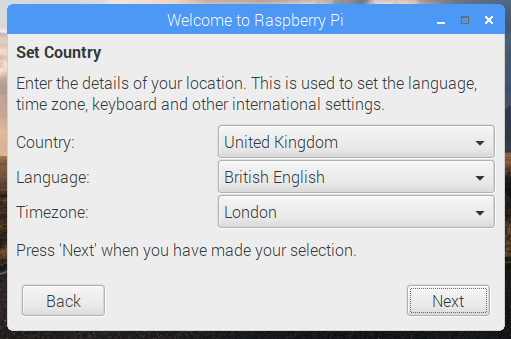 Simon Long, over at Raspberry Pi, has just announced an update to the Raspbian Operating System. The biggest improvement is the addition of a desktop set-up wizard which runs when you first boot up. This lets you set-up Localisation settings (pictured above) and connect to a wi-fi network straight away. It’s been designed to make things easier for first-time users who are often all-at-sea when first booting. There’s also been an attempt at removing some of the lesser-used pieces of software from the main distro and included as a handy app installer so you can install what you want. They haven’t listed what’s been removed, however, so it’s time to download the image and find out for yourself! There are also bug fixes and updates, including a much-needed update to Chromium. Read more here and download the new image here.

← This Raspberry Pi-controlled laser pointer writes the weather out for you
Pi Wars 2019 – Challenges announced, applications open, full speed ahead →