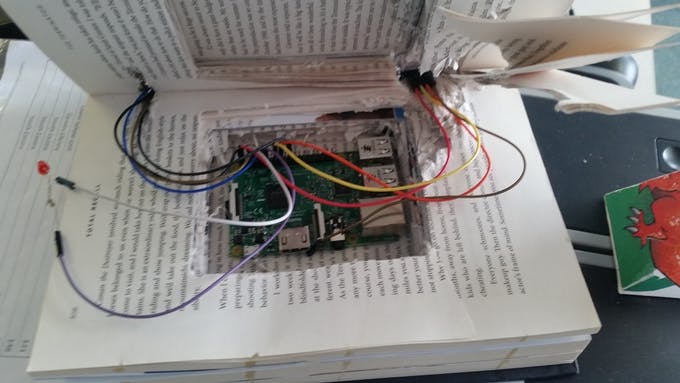 Dan Aldred runs a Raspberry Pi club and asked the kids what they wanted to create. They replied that they wanted to make a book that talks to you, or rather demands that you read it. First of all, they got hold of a book to do it with: Arnold Schwarzenegger’s biography! The game was afoot!

They wired up a distance sensor to detect the proximity of a possible reader and a red LED in Arnie’s ‘eye’ on the cover to glow red if the person ignores the voice which emanates from a Bluetooth speaker. They used a tilt switch to detect movement of the book, which triggers more sounds and also cut a hole in many pages of the book to hide the Raspberry Pi and battery.

Not quite sure how cutting a load of pages out encourages you to read the book, but I guess you could do it so that it reads an electronic copy to you!

You can see the book in action below and read more over on Hackster.io: