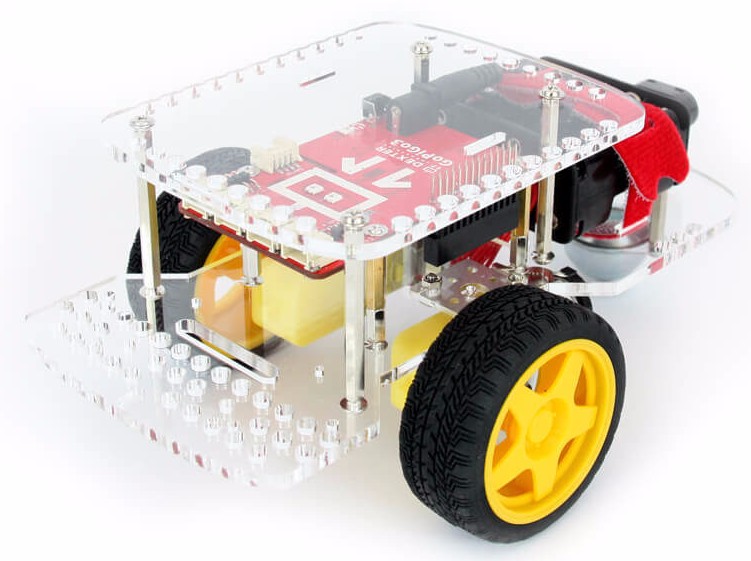 The GoPiGo 3 is the newest iteration of Dexter Industries‘ robotics kit. The US-based company was kind enough to send me one over for review a few weeks ago and I’m pleased to say I’ve now put it together and tried everything out. So, here’s my review. TL;DR: I can’t recommend it enough. Such a nice kit; so much added value. Buy it here.

The kit includes a two-part thick perspex chassis, motors, wheels, an AA battery pack and a special add-on board for the Pi which connects the Pi to everything else. And, oh yes, all the fixin’s and a screwdriver to put the kit together. 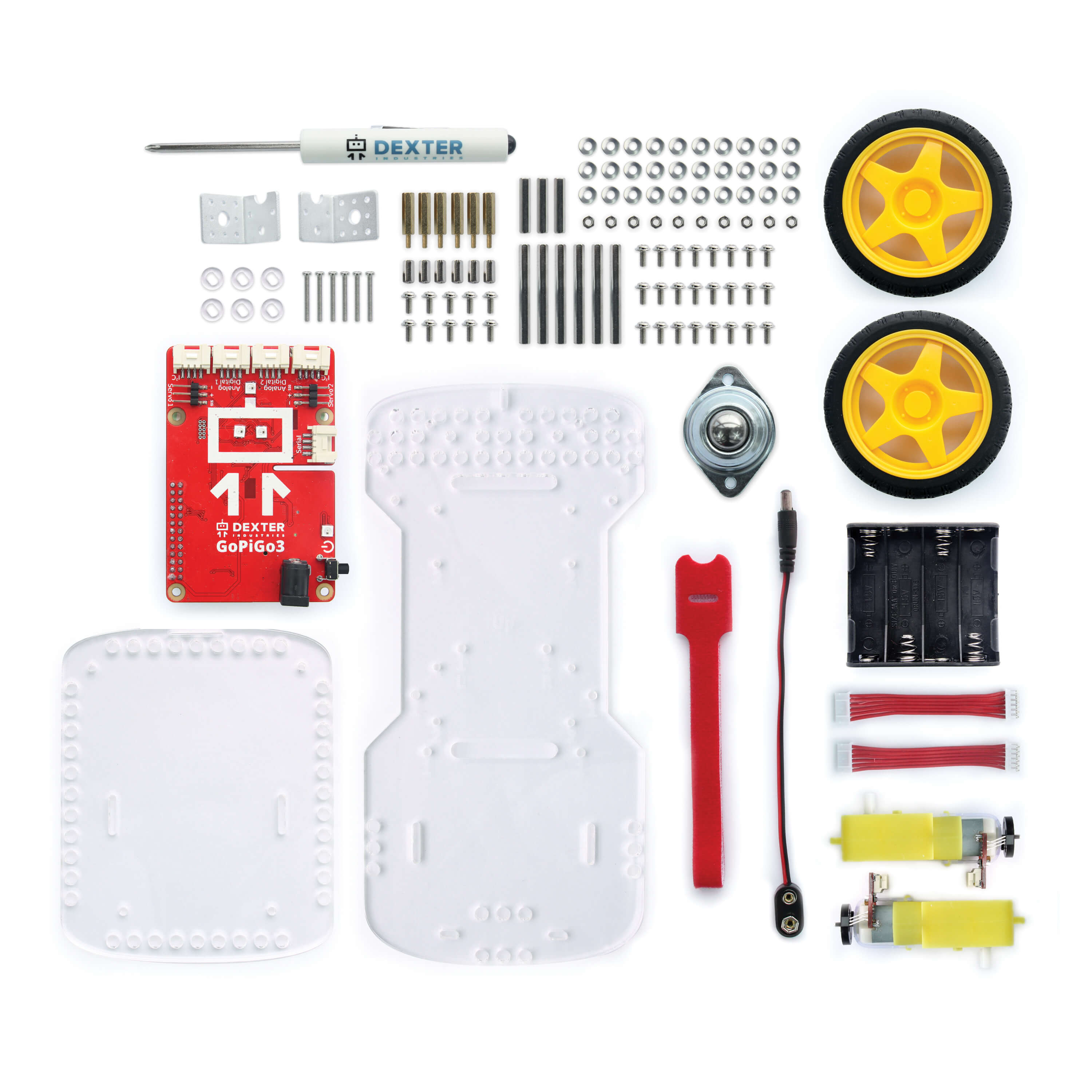 The first thing I needed to do was to go the Dexter website and take a look at the assembly instructions. I’m quite used, by now, to instructions being fairly sketchy for kits like this so imagine my surprise at the quality on display! These are clear instructions with loads of photographs like the one below: 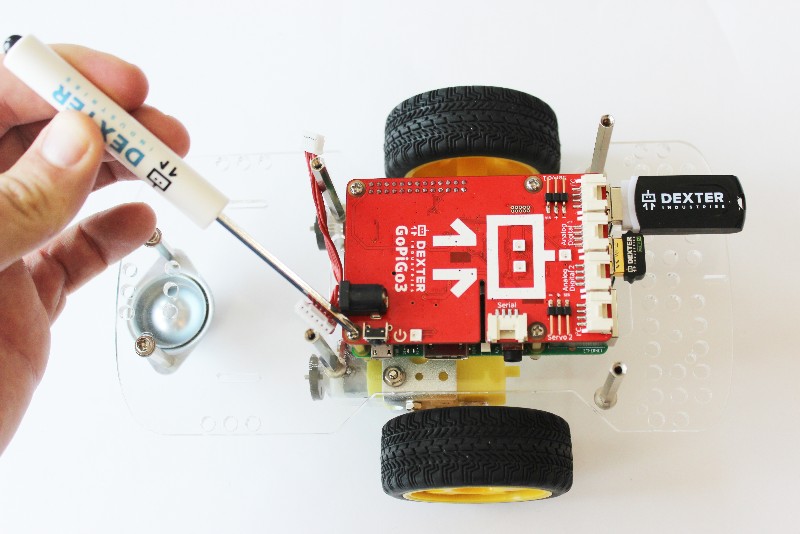 The folks at Dexter clearly spent a lot of time on these, getting them just right. I went wrong once in the process, but it was pretty obvious that I had so I could remedy the situation quickly. Occasionally, you have to look quite closely at the (very detailed) photographs, but that’s so much better than not having enough of them! The robot felt pleasingly solid once assembled.

Let’s take a look at the components a bit more closely:

Of course, no robot hardware is really worth anything without some software to go along with it. The team who put the kit together recommend their own flavour of Linux – DexterOS. This operating system is designed specifically to work with the GoPiGo. You plug a wifi dongle into the Raspberry Pi, press the power button on the GoPiGo board and your Pi will boot up and create it’s own wifi hotspot. Then, using your laptop, phone or tablet, you get access to all the learning materials. This is where the GoPiGo/DexterOS really impressed me. It’s all about the learning. First of all, you’re introduced to Bloxter, a visual programming language which is based on Google’s Blockly. 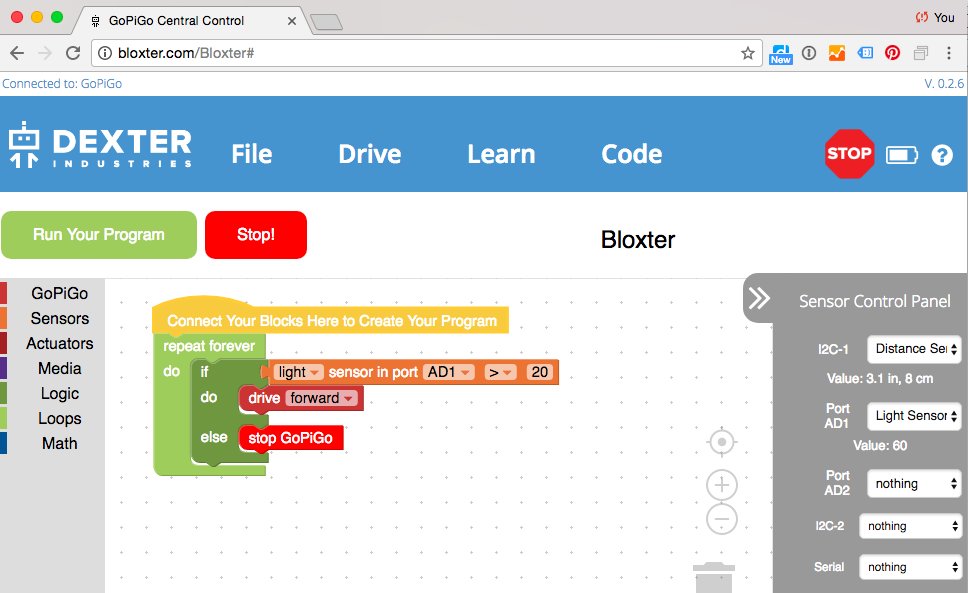 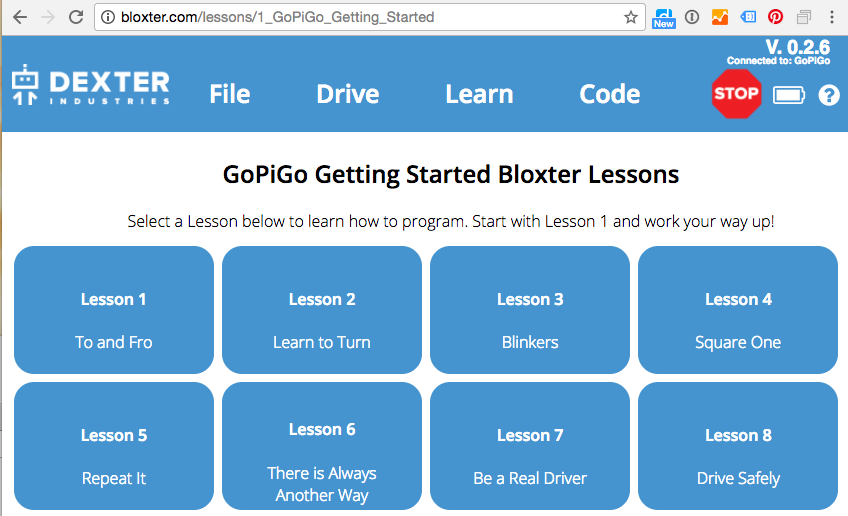 … which take you into Bloxter to do the actual programming. Now, the way that Blockly has been adapted into Bloxter is very impressive. Everything you need to do the exercises, and to take it further, is there. Blockly is very similar to Scratch in the way programming blocks are used to construct statements, loops and conditions. In fact, if you’ve used this kind of visual language before, you’ll have a head start. I count myself as a bit of a beginner when it comes to visual languages, but I found Bloxter a breeze to use, and I can easily see it being a hit in the classroom. You can do very complicated things with Bloxter, just by combining the different movement blocks. Of course, if you also invest in the distance sensor you can do even more complicated things, and there are blocks for this too.

The programming possibilities don’t stop there, however. Included with DexterOS is a web-browser-based Python coding environment based on an Adafruit IDE. Various libraries and examples are pre-installed and, for the more advanced programmer, this is a great way of interacting with the robot. I used it a little (I’d seen the IDE before) and was impressed with what I found.

The last bit included with DexterOS is the ‘Drive’ mode. This is a simple point-and-click interface that allows you to drive the robot however you see fit. It is necessary, although of course it’s not of the most educational value – it does let you test the robot out simply, though, so I can see why it’s been included.

All this great value-added does, of course, come with a price tag. The GoPiGo costs just under $100. This gets you the base package including everything I’ve mentioned above. For another $100, you can get the Beginner Starter Kit which also includes the Raspberry Pi, wifi dongle, servo package, distance sensor, microSD card with DexterOS written on, an 8GB USB drive (useful for OS updates) and a Pi power supply.

To be honest, $99 for the base kit isn’t actually bad, considering the quality of the parts included. I’d have liked to have seen better motors – those yellow motors are so standard now – but then that would have bumped the price up. Also, the encoders and pre-soldering solution with the cable/socket is such a neat solution, this more than outweighs any deficiency in the motors. The chassis is nicely done and the GoPiGo main circuit board is fantastic. The ability to power the Pi and the motors from a single power source is also a nice addition – it saves the problem many robots have with needing two power supplies (one for the Pi, one for the motors).

I think, however, it is the addition of the software which fully exploits the circuit board that is the master stroke. The included programming exercises are what you’d expect from a premium product – there’s such a lot of classroom and home educational value on display here, and I want to congratulate the Dexter team for their work here.

Overall, then, a fantastic experience with the GoPiGo 3. Considering I left 2-3 weeks between using the product and finishing this review, I’m pleasantly surprised at how it stayed with me as a positive Raspberry Pi learning experience. I can especially see this kit as being a multiple-session learning exercise – get the kit, build the robot, program it. The price is reasonable. It’s not the cheapest out there by a long shot, but the material it comes with, the build experience and the package as a whole make it very easy to recommend.

The GoPiGo is available from Dexter Industries in the USA and from ModMyPi (base / starter kit) in the UK.