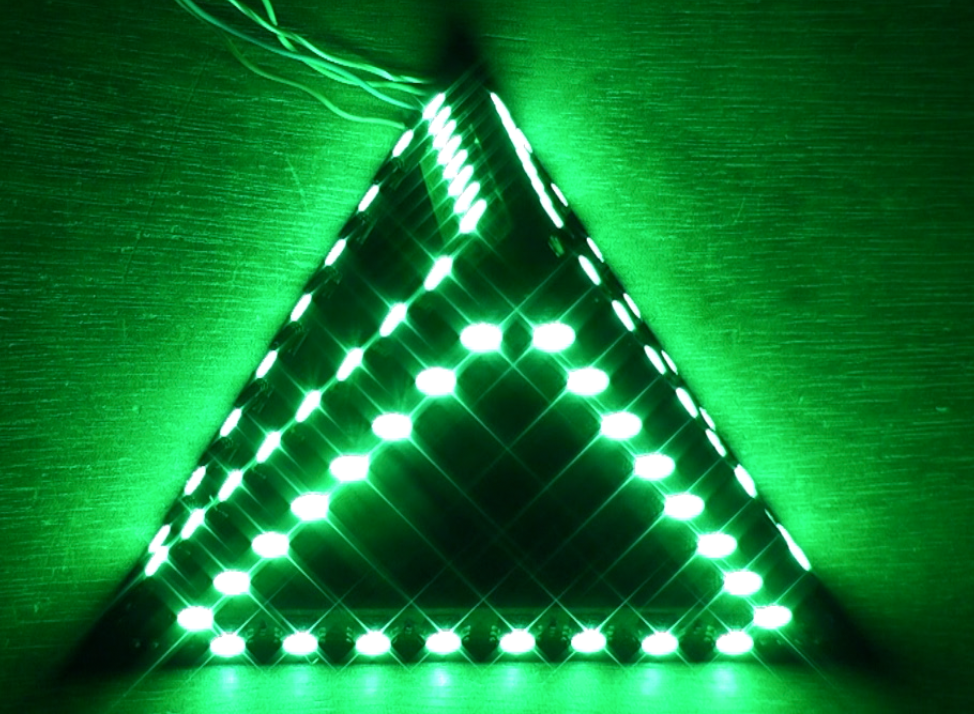 Back in March 2017, Alex Eames ran a Kickstarter for RasPiO InsPiRing, a system that enabled you to ‘sculpt lights with RGB LED shapes’.

TL;DR – I got the Pyramid bundle in the Kickstarter, had great fun soldering it up and was particularly impressed with the assembly instructions. The whole system is Highly Recommended. I’m also happy to report that Inspiring has now moved on to general sale.

The campaign was successful, taking over £20k, and Alex set about producing the products which were: a ‘straight 8’ stick, a circle, a triangle and a driver board pHAT for the Raspberry Pi. All the shapes are populated with SK9822 RGB LEDs. They are, rather ingeniously, all the same ‘pitch’ – 1cm between the LEDs – which means that when you assemble the shapes into your ‘sculpture’, they look like they belong together. Alex also put together several kits – an NTP clock, a Pyramid and a ‘bits and bobs’ kit with several different shapes.

I always back Alex’s Kickstarters – not only is he a good personal friend but he also tends to deliver early, and this time is no exception. Delivery was a whopping three months early, so it was with great excitement that I received the package containing my kit – the Pyramid. I wanted to get the Pyramid because I was hoping to build a VU meter so that all the LEDs would pulse with the sound of music (which, no doubt, the hills are alive with).

Before I got to that, however, I needed to assemble the Pyramid from the kit parts. Alex had warned me that it was a bit fiddly soldering the Pyramid together, so I was greatly relieved when he told me that there was an assembly video. As per usual, the video is excellent, full of close-ups and clearly stated instructions. It took me about two hours to solder everything up. I didn’t rush, I just worked methodically. There are two elements to the build which I found particularly tricky:

Here’s a photo of the finished build (I’m using Alex’s photos – they’re so much better than mine): 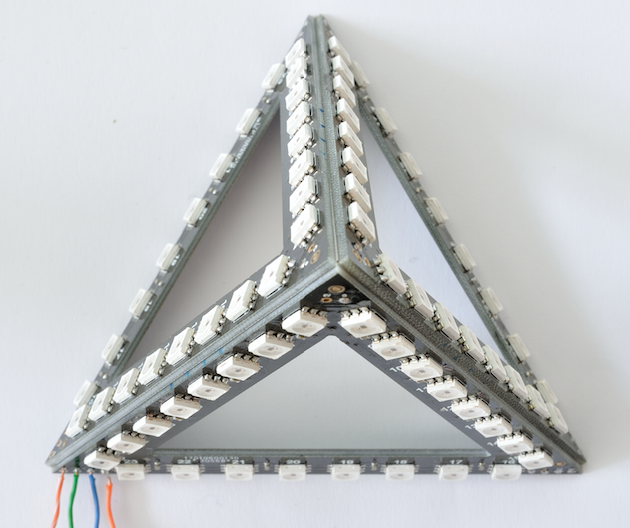 and here’s the internal shot (with the tricky hook-over right in the centre of the top of the pyramid): 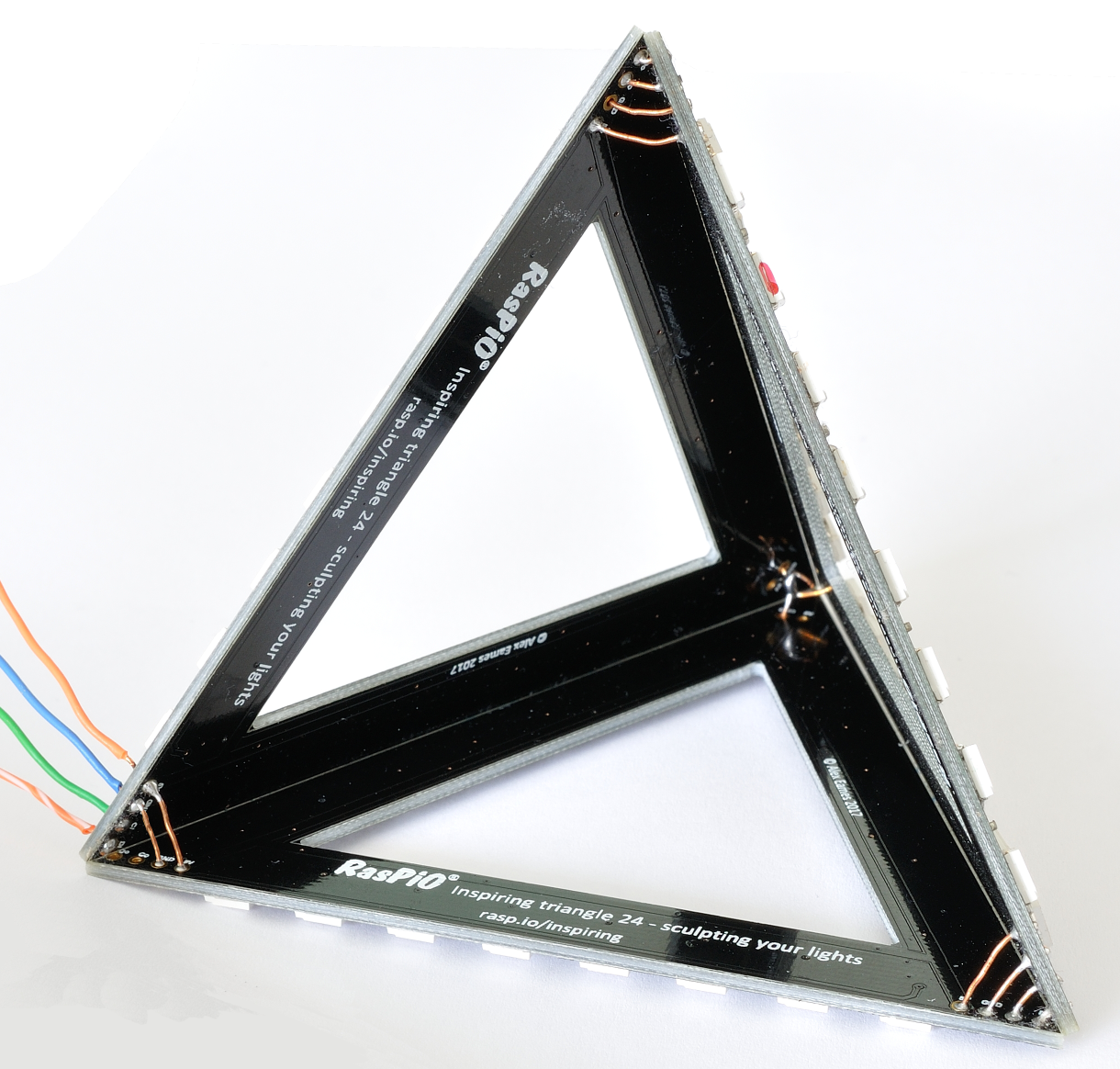 I have to say, I’m not what you’d call an expert maker (much as I’d like to be) and I found the build challenging, but not impossible: it just takes time.

Next up, I needed to assemble the Raspberry Pi driver board, because I wanted to use it with the Pi. There are plenty of other ways you can use the InsPiRing shapes – Arduino, Wemos and Digispark are all usable – but I’m a Pi person. Fortunately, Alex has done another assembly video for the driver board. This is a much simpler affair and is very reminiscent of the Analog Zero build (also highly recommended) with headers and a chip socket the highlights.

Finally, I’d finished soldering. The next step was to fix the driver board to a Raspberry Pi, connect up the Pyramid and boot up into Raspbian. Having done that, I took a look at the instructions page and discovered the Inspiring GitHub repository. I cloned the repo onto the Pi and then looked into the folder to see what was available to test things out. There are numerous examples for the different shapes, all of which I adapted to use the 72 LEDs available on the Pyramid. There are a couple that just don’t ‘work’ with the Pyramid as-is, but this is to be expected. There’s the clock example which is suitable for the circle, and there’s an example which works with the MCP3008 analog-to-digital converter chip which can be added to the driver board but which I didn’t have. I will add it at some point, though – just for fun, if nothing else, because I just love a bit of analog! There is also, thank goodness, a user guide to download.

Take a look at the video below – this is the updown-pyramid.py example. (Much kudos if you leave a comment on this blog post with the title of the piece of music, and where it’s from!) The video does the product much more justice than the static photo at the top of the page. I did find that if I put the brightness of the LEDs up to maximum that it caused the Pi to crash, due to a voltage drop, but Alex had warned me about that. It’s also covered in the extensive documentation. I was using an official Raspberry Pi power supply, the 2.5A one, so this is a pretty good example of what’s possible.

So, what did I think? Well, first of all, the Pyramid is a lovely maker project for an afternoon. I thoroughly enjoyed putting it together and I was dead chuffed when it worked first time! In terms of “what can you use it for”, really the only limitation is your imagination. As I said before, you could use it as a VU meter, you could use it as a status display for three different things (servers, for example), you could even turn it into a clock – minutes on one side, hours on another, seconds on another. There are a lot of possibilities here, even ‘just’ with the Pyramid. Most uses require a little bit of rational thinking, and probably some maths, but that’s the interesting thing about it – it’s a challenge from both a hardware and software point-of-view.

Alex was kind enough to pop a circle and a couple of straight 8 sticks into the bag as well, so I’ll be experimenting with them from a sculpting point-of-view – I’m sure I can make something out of them! 😉

I highly recommend the InsPiRing system. It’s flexible, it’s fun and it’s very, very bright! The prices are pretty reasonable, considering the number of LEDs on each shape and the shapes and driver board are expertly designed by someone who clearly knows his PCBs.

So, if you’re looking for a nice maker project, take a look at some of the kits available. If you want to make some special combination of shapes, you can also buy them individually to allow you to construct whatever you wish.