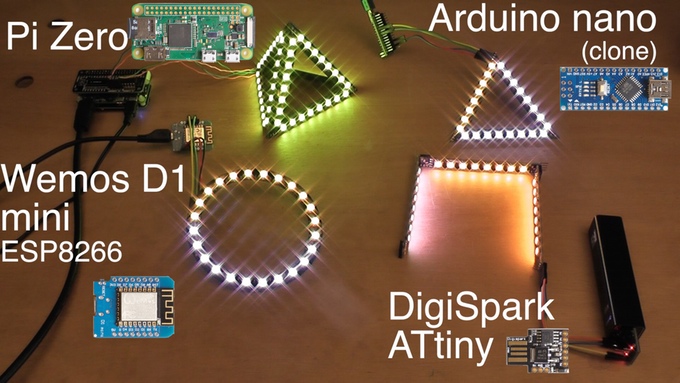 Alex Eames (from RasPi.TV and Rasp.io) has run several Kickstarters and his new one looks to be his best yet.

His new campaign is called RasPiO Inspiring. It is a new system for ‘sculpting with RGB LEDs’ and is made up out of several different geometric shapes with a standard 10cm side length, covered in ultra-bright APA102 RGB LEDs and housing a standard solderable connector. This makes it easy to combine them into other 2-dimensional or even 3-dimensional shapes. To start with, Alex is offering a ‘straight-8’ (stick), a triangle and a circle, together with the Raspberry Pi driver board, along with some bundles. If the campaign does well, he plans to expand the range with a semi-circle and a square. Who knows where else he could take it? Letters? More shapes?

The really interesting part for me, apart from the new shapes (I really like the triangle), is that the Inspiring family can be driven from a Raspberry Pi (via a driver pHAT), an Arduino, an ESP8266 (for example, the Wemos) or a DigiSpark. This means that you can drive your shapes and sculptures from something very small (like the Digispark) to something larger (like a Pi 3). With the launch of the Raspberry Pi Zero W (which is compatible with Inspiring, as are all 40-pin Pis), the idea of an Internet of Things blinky riot of colour becomes possible. He’s even written a Python library for the Raspberry Pi to make it easy to get started and there’s an existing library called FastLED for the other platforms.

There are lots of other uses for bright LEDs, of course, and he identifies some of them on the Kickstarter campaign page.

Obviously, though, being a Kickstarter he needs your support to make it happen. Alex is currently offering the following pledges:

The kits do need some soldering, however this is expected to be well in the range of most abilities. There’s never been a better time to start learning if you don’t already – those Zero W headers won’t solder themselves!

I’ve already pledged for a Pyramid and am really looking forward to getting it. Alex has a proven track record on Kickstarter, and I have no doubt that he’ll manage this one well and deliver on time.

So, head over to Kickstarter and take a further look and, if you like the look of it, make a pledge! The campaign video is below:

← New Pi Borg robotic Kickstarter is a Monster – and a very nice Monster at that!
Berlin’s first Tech Jam and Coding Evening are coming up soon in March and April! →

6 comments for “New Kickstarter encourages you to sculpt with RGB LEDs and a Raspberry Pi, Arduino, DigiSpark and Wemos”