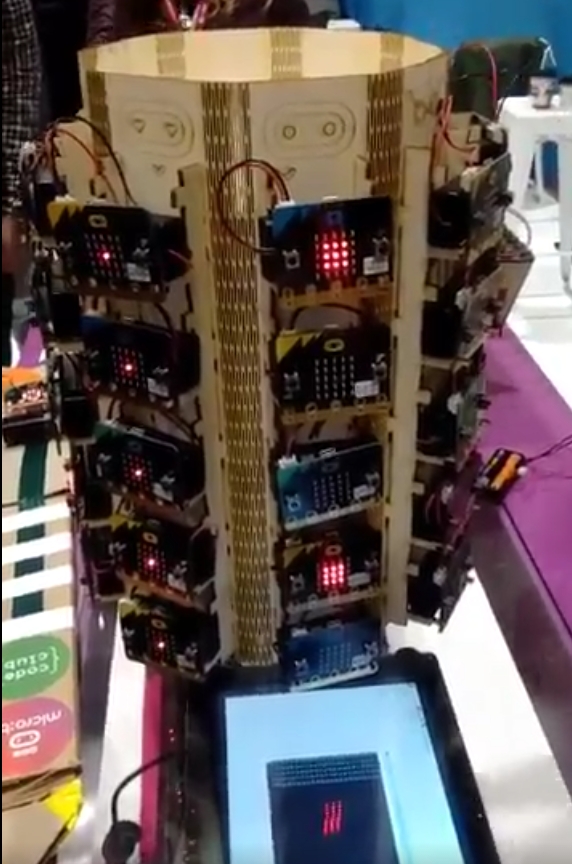 David Whale (@whaleygeek), who some of you will know (he goes to a lot of events and does loads of outreach work, especially with micro:bit and the IET, and also runs a Raspberry Pi club in Harlow) and Jonny Austin, CTO of the micro:bit Foundation, have done an excellent project to show the micro:bit and the Raspberry Pi working together. They’ve built a rotunda, called a Tone Matrix, of 40 micro:bits representing a musical scale with each of 8 columns representing groups of notes on a pentatonic scale.

As the micro:bits are switched on, they communicate wirelessly with another micro:bit which is attached to a Raspberry Pi. The Pi then interprets which micro:bit(s) in the matrix are switched on and plays tones according to their positions. The whole thing then plays the notes in a loop, using Pygame for the individual ‘notes’ control. It is even possible to play a chord by turning on several micro:bits in a column.

I spoke to David about the project, and he explained it in-depth and told me that most of the actual computational work is done by the Pi – the micro:bits are essentially used as controllers.

Jonny and I never met while working on this. We collaborated via Skype and Github the whole way. I tested the Pi code on a train and Jonny wrote the micro:bit code on a plane.

The laser-cut frame for the instrument was created at Cambridge Makespace.

You can see a video of it in action, at Bett, below (it runs from the beginning to about 3:45) and a slightly closer-up video of it via Twitter here. You can see all the code on Github here.