Zach and Jake are into the last few days of their IndieGoGo campaign for the Maketronix Alarm. It is a simple add-on board for the Raspberry Pi and houses 9 buttons, an LED, a buzzer and a header for a PIR movement sensor, which comes with the board. Using the library and resources which they will write, this is an educational project that teaches you how to build your own alarm system. 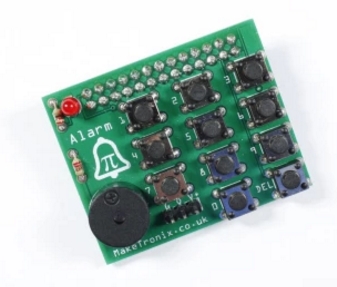 Zach sent me one of the boards and I’ve taken a look at it. It’s very simple but, being pre-assembled, it’s an ideal kit for learning how things like alarm systems work. The library is a work-in-progress, as are the resources, but the stuff that’s been done so far looks good. Zach’s proven track record with the PiPiano makes me think that the campaign will be run well and that the hardware is good.

The campaign runs until the 12th December, so head over to IndieGoGo to read more and pledge.