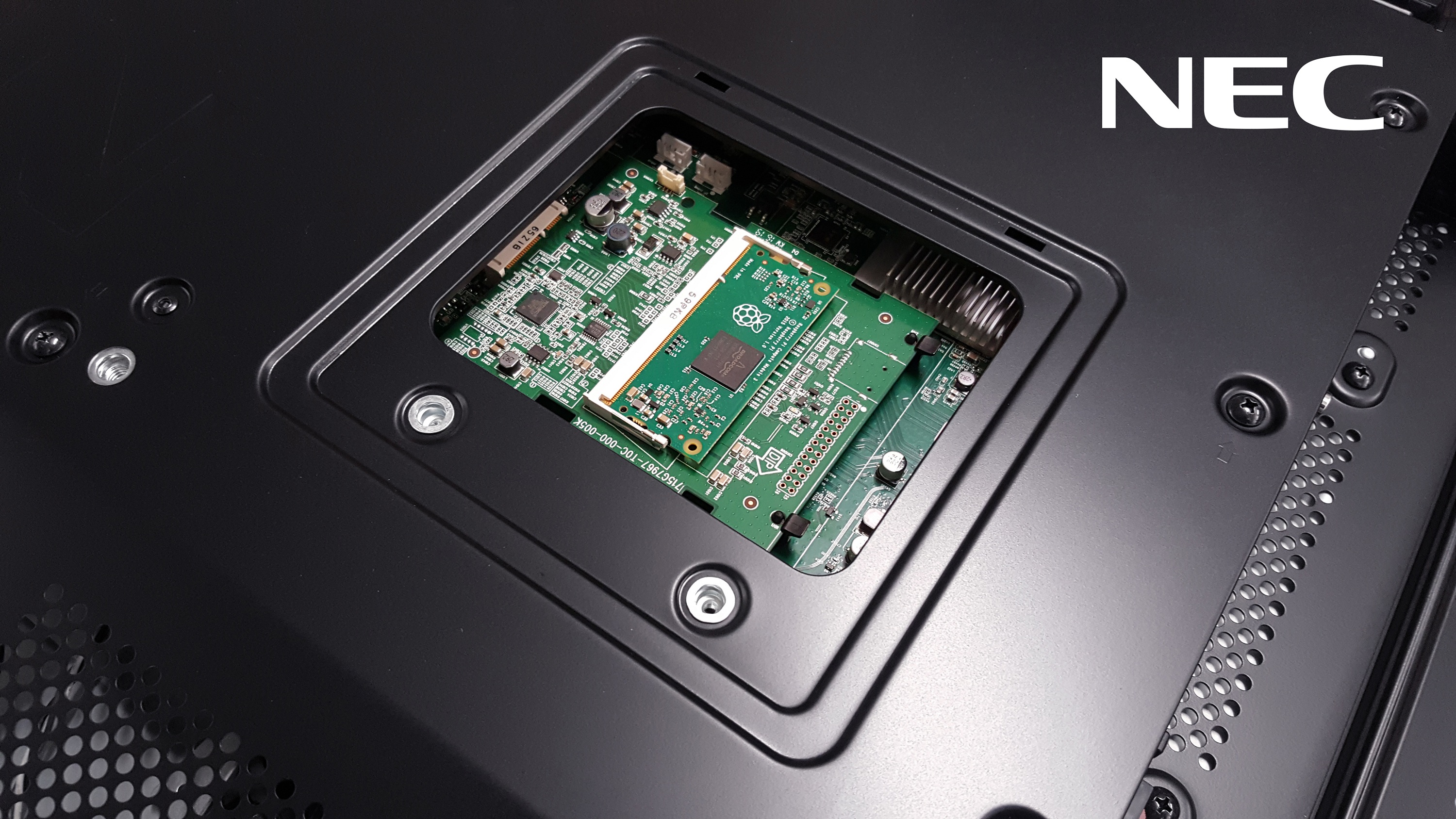 NEC have just announced that they are to produce large (>=40″) displays with an integrated slot for the Raspberry Pi Compute Module. The big news here is that they are planning to use the as-yet-unreleased-publicly Compute Module 3 (take a look at the image above, click to embiggen – that is a CM3 and it’s clear that although the form-factor remains the same, the design is slightly different from the CM1, pictured below!)

The news was announced at the Display Trends Forum in Rome on 10th October by Thomas Walter (Section Manager – Strategic Product Marketing) with a link-up to Pi Towers where Eben Upton (CEO, Raspberry Pi Trading) filled in some of the technical details:

During the broadcast, Eben confirmed that NEC has commissioned Premier Farnell to produce a special 16GB flash memory version of the CM3. This suggests an upgrade in flash memory from the default of 4GB, allowing much more space for other software in addition to the default Linux distro, which one assumes will be some variant of Raspbian – this appears to be confirmed by a later announcement on displaydaily.com.

So, what can we glean from this announcement? First of all, and this is a biggy, that Raspberry Pi is seen as a stable enough platform on which to base a major industrial product. NEC is no small-fry company and 40″+ is no small-fry display size. Secondly, that the Compute Module 3 is almost ready to be launched. I wouldn’t be surprised if we hear about the availability of the CM3 within the next couple of weeks. Certainly, it is very unlike Raspberry Pi Trading to reveal the imminent launch of anything, and I wouldn’t expect that to change any time soon, so it must be getting close! Thirdly, that the form-factor of the Compute Module is equally unlikely to change within the foreseeable future – industrial customers are using these modules now and they will want them to be swappable and upgradeable.

This won’t mean anything in particular to most of the Raspberry Pi community at large, of course, but it is reassuring to know that as well as the hobbyists, makers, educators, families and classes using the Pi, there is a healthy backing from industry to bolster the stability of the Cambridge-based company.

← Flash and Scratch 2.0 working on Chromium on Raspberry Pi PIXEL
Cheap as chips: the Raspberry Pi Zero in a botched-together games console →