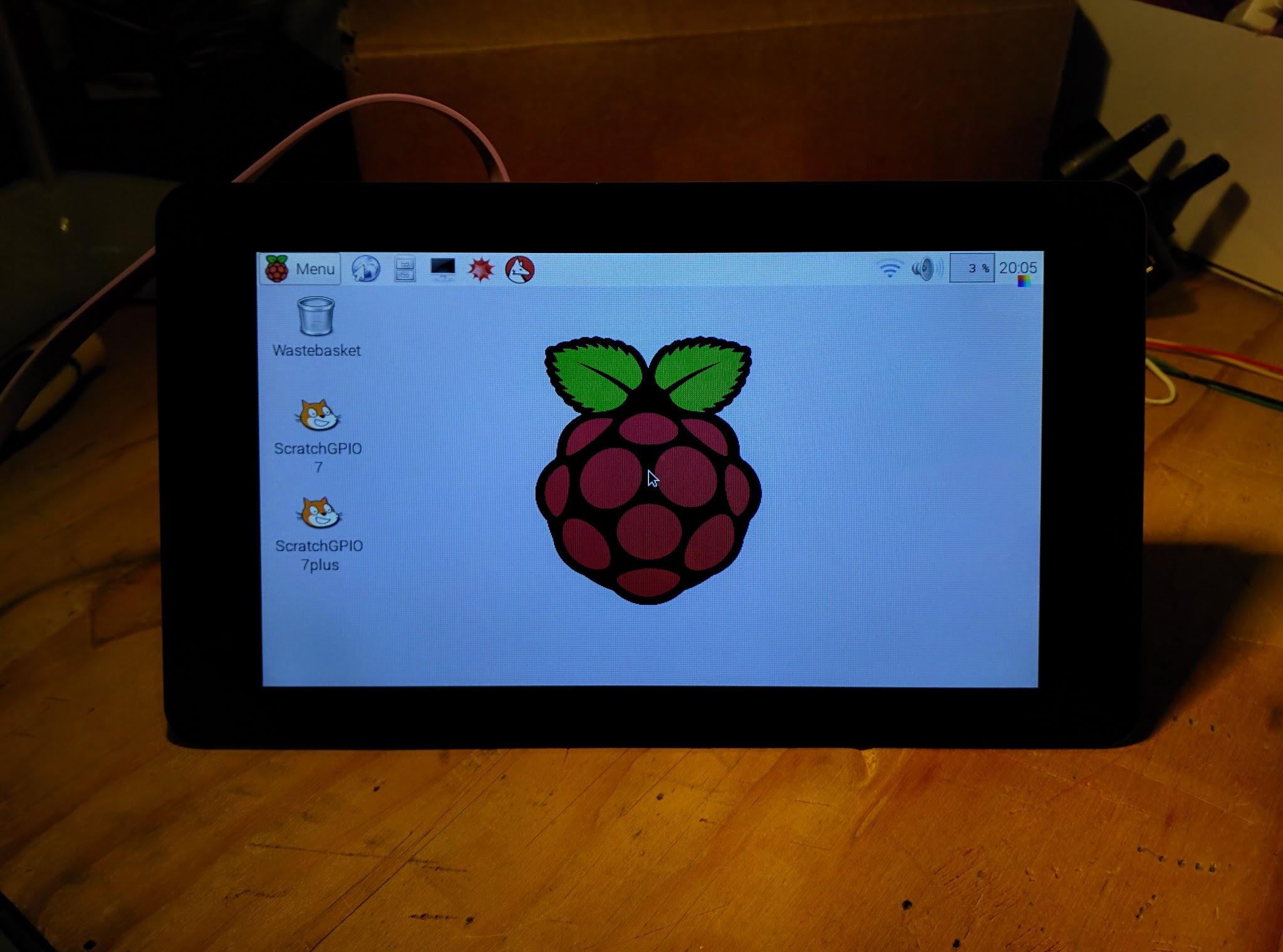 Mike: Here’s a guest post from my good friend Tim Richardson. He got hold of one of these screens early and was kind enough to write a review. All the photos (except the picture of the Pi, which is a stock image) were taken by Tim.

A long, long time ago, at a CamJam not far, far away, Raspberry Pi Trading (the commercial arm of the Raspberry Pi Foundation) brought along and demonstrated a 7” touch screen that looked pretty similar to the Google Nexus 7.

The team became really busy with the B+, the Pi2 and other projects, with the screen taking a lower spot in their order of priority. It also had to go through a number of rounds of EMC testing to ensure that the screen and driver board did not affect radio and other equipment. Well, after a (too long) delay, RPT has finally released the screen! Check out their announcement post, with tonnes of technical detail here.

Yes, that’s just £50!  Of course, you get the screen. It’s only 800×480 pixels, which is smaller than I was hoping, but it is very clear. You also get the driver board, a short ribbon cable, some spacer screws, and some jumper wires. Yes, it’s a kit that you have to put together yourself. But it is really easy. It took me about 5 minutes, and part of that was finding my shorter jumper wires as the ones supplied are a little longer than necessary.

And you now have a use for that mysterious Display Connector that sits right on the edge of the board.

Before connecting your Pi to the screen, you should first ensure you have updated it to the latest version of Raspbian. I understand that NOOBS does not (currently) work, as when that boots it does not have the drivers required for the board.  In Raspbian, open a terminal window (if you are in Desktop mode) and issue the following commands, one after the other, waiting for the previous one to complete before going onto the next. The first two are really the only ones required, but the other three ensure that your Pi has the latest and greatest version of Raspbian. Answer ‘Y’ to any prompts:

Constructing the kit is easy. I have written a full assembly guide/tutorial over at The Pi Hut, so head over there to take a look.

How Good is it?

I’ve been really looking forward to this screen, so clearly it is aimed at me! Just me!

The screen resolution is relatively low at just 800 by 480 pixels, but it is very bright and clear with very good colour rendition. Touch reaction is also really good, without any lag, which means it should be suitable as a controller.

Who is this aimed at?

Basically, anyone who wants to use a small screen on their Pi project. Everything is exposed at the back, which is great for makers, but does make it vulnerable to everyday use. As it stands, without anything protecting the Pi or any of the cables connecting the Pi to the driver board, and the driver board to the screen, I don’t think it is suitable for the average child’s everyday use.  But if someone markets a reasonably priced case (<£15) then yes, there is no reason why it cannot make a perfect little computer for that perfect little daughter or son that many of us have. 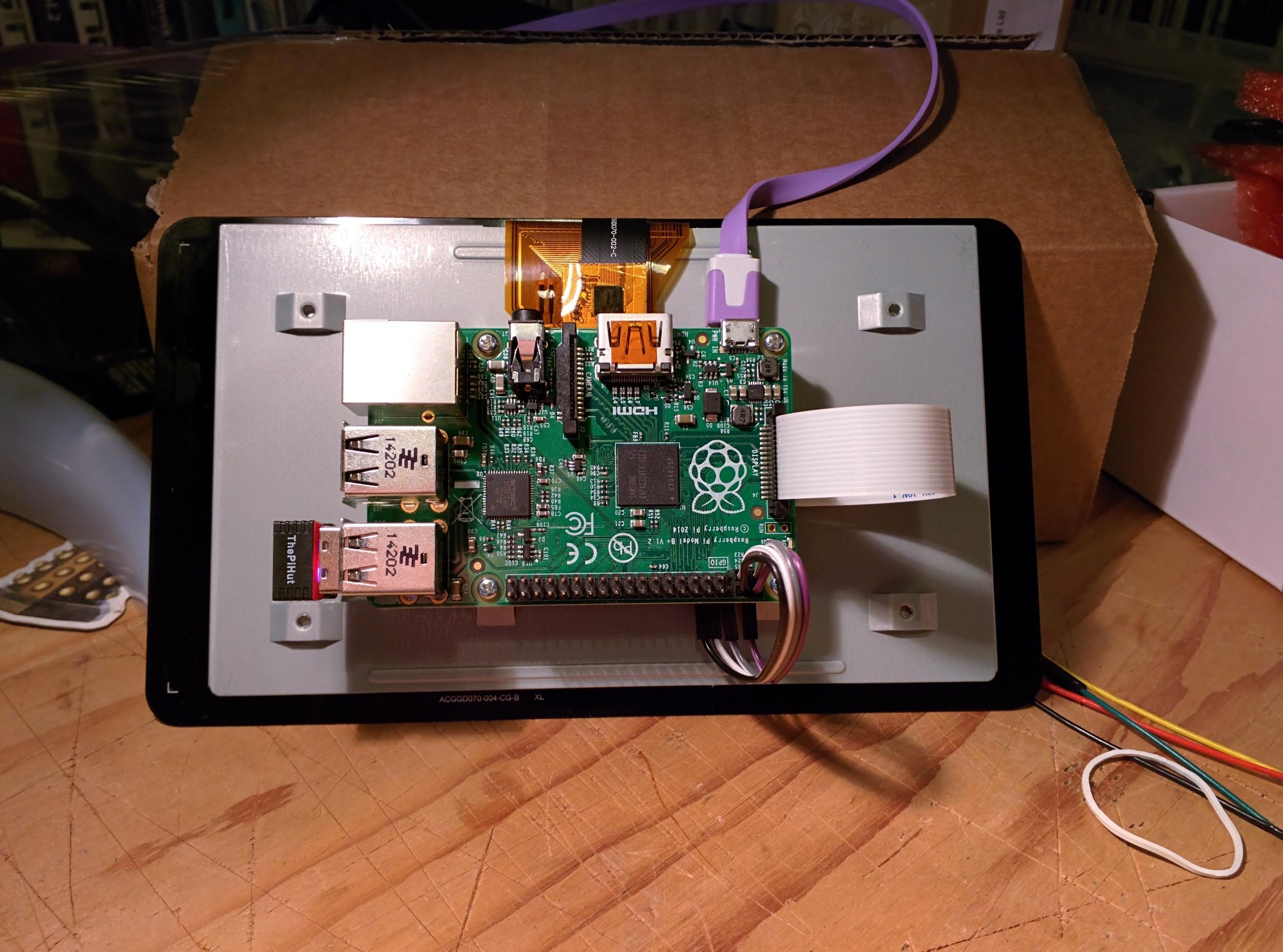 But for just £50 I would think that everyone interested in building almost any project that needs a screen for the Raspberry Pi would want one, especially if that project also requires some input that this screen is able to provide via the touch interface.

I really think that Raspberry Pi Trading are onto a winner here for all project makers. It will just take an enterprising company or two to come up with a reasonably-priced case to improve the usability for everyone who has a Pi!

The screen is a cool piece of kit, especially for makers, and I have to agree with everything Tim has said. Pimoroni will, I’m sure (if they haven’t already), bring out a perspex case for the screen, providing much-needed protection and stability. The £50 price point is attractive enough, as long as you don’t want high-definition, and I believe in future kits will come pre-assembled with the driver board already attached. I would like to have seen a more robust method of powering the Pi than a couple of jumper cables, but then it is very in-keeping with the hobbyist/DIY feel of the kit.

Alex Eames also got hold of a screen early and you can read his blog and watch his video review over at RasPi.TV.

A Case for the Screen

Hot on the heels of the Raspberry Pi Foundation’s announcement, Pimoroni announced that they have released a stand for the screen. You can buy the bundle of the screen + stand here. (The Pi Hut will have them in a day or two)