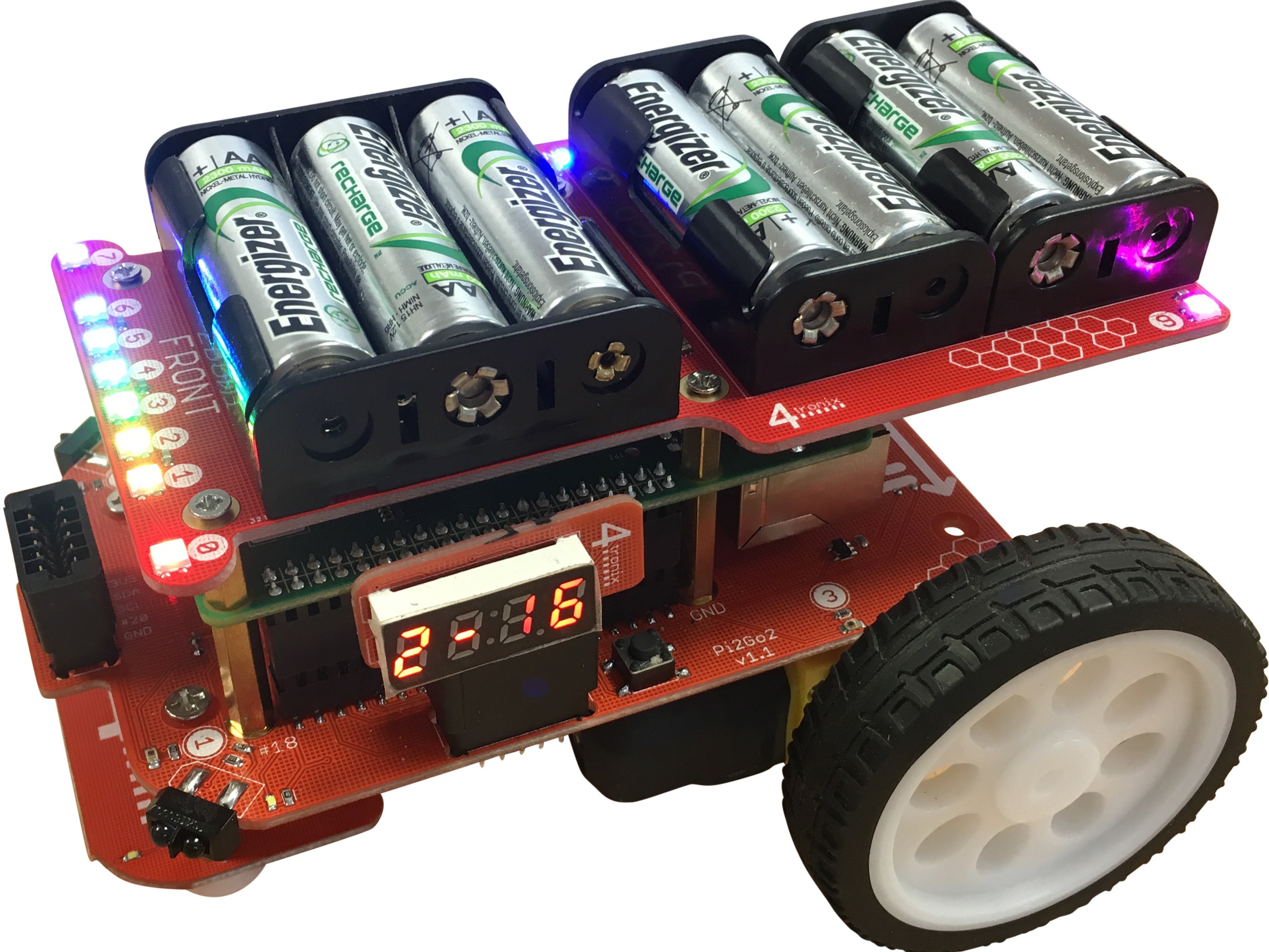 Back in 2014, robotics specialist 4tronix released the Pi2Go and the Pi2Go Lite, great robotics kits using PCBs as the robot chassis, surrounding a Raspberry Pi.

Now, 5 years (and many products, including this year’s Pi Wars badge!) later, Gareth has designed the follow-up to the Pi2Go, conveniently called the Pi2Go Mk 2. He sent me one to put together and play with, so here goes.

TL;DR – It’s fabulous, it has everything and costs £72 (inc VAT). Get one from the 4tronix website. You can get 10% off everything at 4tronix by using code 4TXPARTY10.

What’s in the box?

The Pi2Go Mk 2 comes in an attractive retail box and contains all the components you need, apart from a Raspberry Pi (all main, 40-pin models are supported – the Zero is usable if you get yourself some extra spacers), an SD card and some rechargeable AA batteries. 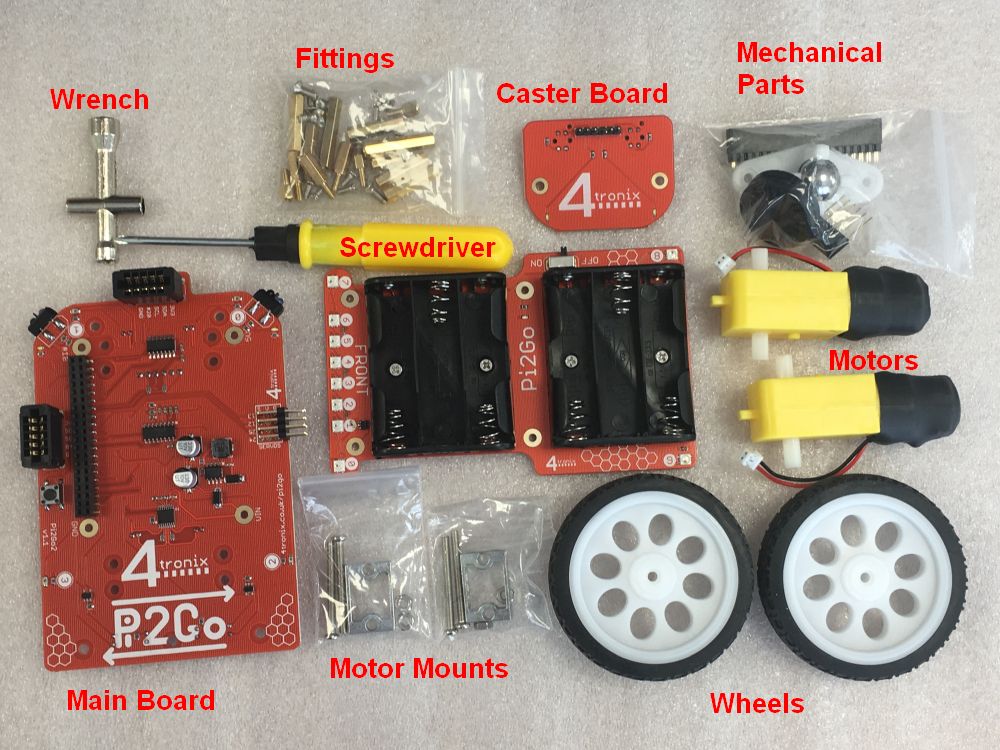 The central piece of the puzzle is the Pi2Go main board. It has all the mounting points for the support structure, the motors etc and also has push-fit headers for the extra bits and pieces. It also houses the DRV8833, a standard motor controller, but a very reliable one.

The other big part of the structure is the battery pack. The battery pack comes in several flavours. The default one that comes with the Pi2Go is for 6 rechargeable AA batteries. There is also an option for 7 AAs to give a bit of extra grunt and also a board for two 18650 rechargeable lithium cells which are more resilient to the current used for the motors and, specifically, for the Raspberry Pi 4 (if that’s what you’re using) which uses more juice.

Bit by bit, step by step, putting it together

I decided to put together my Pi2Go using the 7-battery plate, just because.

A full assembly instruction guide is available on the 4tronix website. I followed the guide to the letter. I got a little confused at one point because there were some extra screws provided, but I soldiered on. Everything fitted together “just so” – I would suggest children who are lacking in fine motor skills would need some assistance, but slightly older children with more control would have no problem. It comes with a screwdriver and a hex-nut tool, which was handy.

I particularly like the little motor mounts that hold the motors/wheels to the assembly. Speaking of which, the included wheels are of a new type – very nice, very grippy. I also liked the way that power is delivered to the main board – through the pillar stand-offs – and I really appreciated that no soldering was involved – I could do the whole thing on the kitchen table without worrying about scorch marks!

In about 45 minutes to an hour I’d built up the robot which looked as below: 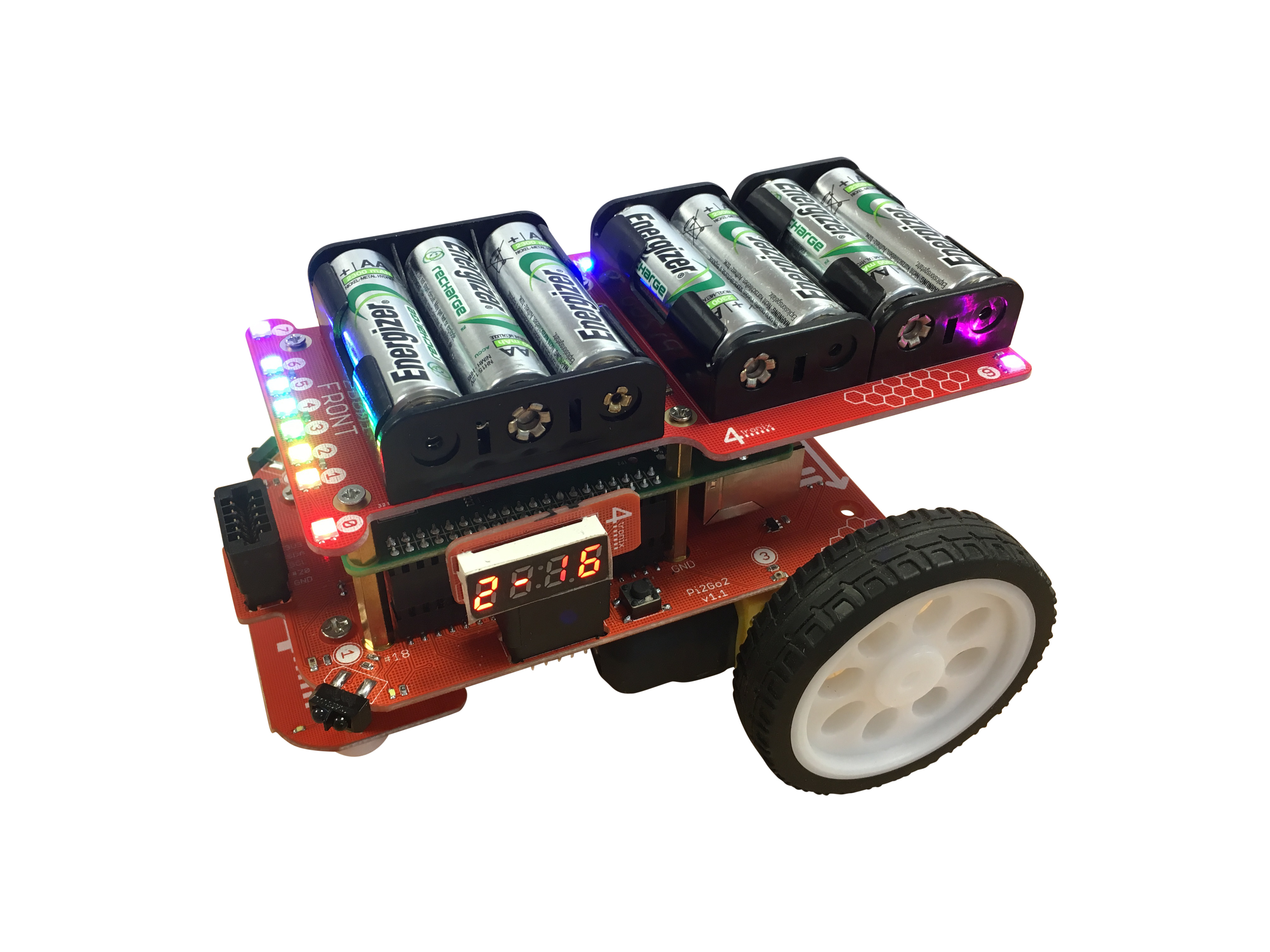 Another option available is to convert the base model into a 4-wheel drive vehicle by adding two extra motors and wheels. I’ll no doubt do that later, so for now here’s a picture of the made-up 4-wheel drive robot: 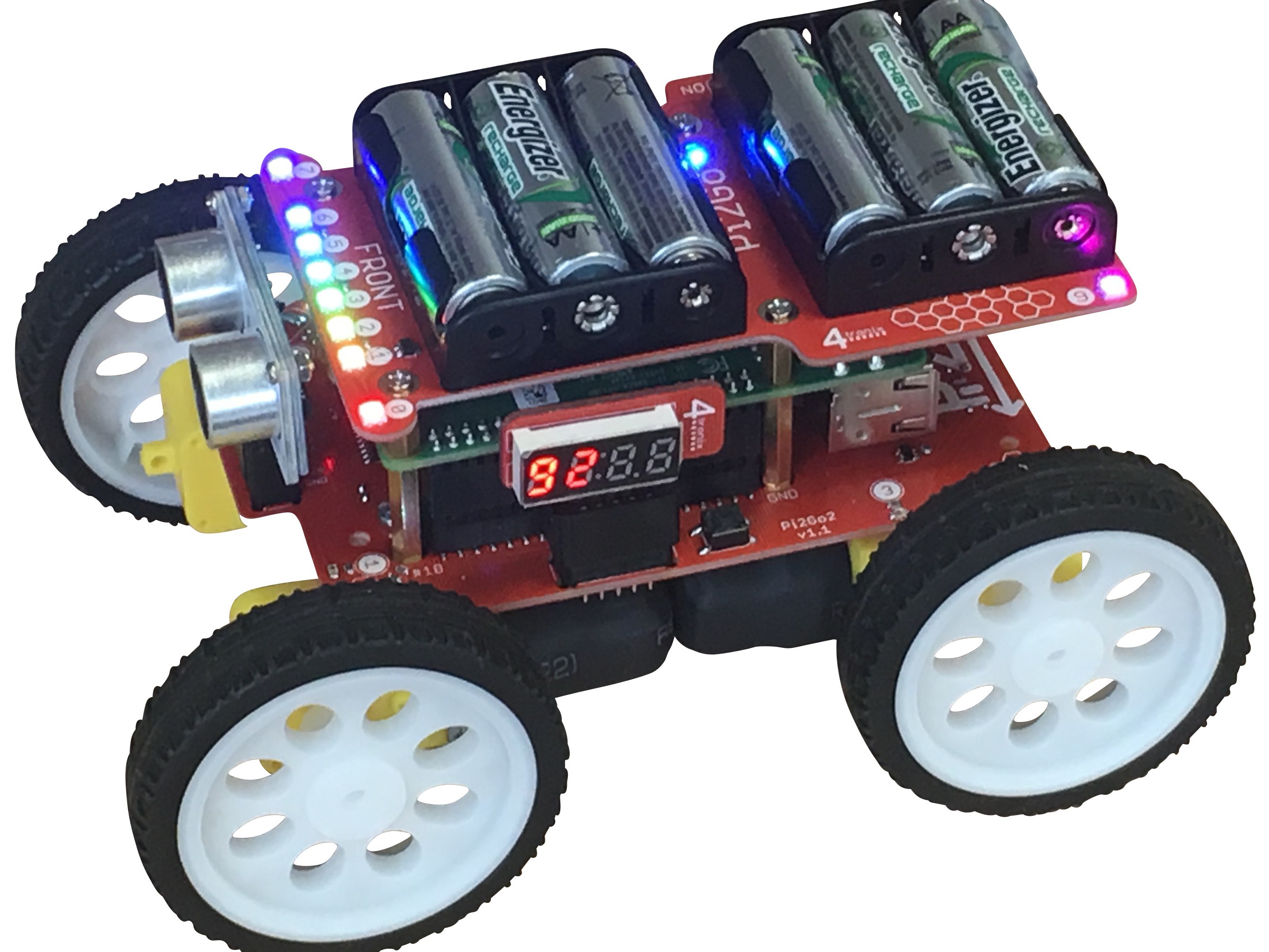 The battery boards all have 10 Neopixel-compatible LEDs (SK6812-3535) on them, all programmable. This is a nice addition – everyone likes blinkies, after all 🙂 It just goes to show how much thought is given by Gareth to his designs. He’s even added an on-off switch for the battery pack, which is very convenient!

The main Pi2Go board has, as I mentioned before, push-fit headers for “extra bits”. These are “edge connectors” and there are three of them. In the pack, you’re given an Ultrasonic sensor breakout and an IP address read-out. These plug in as you can see above. The spare edge connector is a great addition because it’s compatible with the Pimoroni Breakout Garden I2C boards. What a terrific idea, and I would say that the 6DoF Motion Sensor Breakout is the one to go for so that you know how the robot is orientated.

Also on-board the robot are 2 infra-red obstacle sensors (on the front corners), 4 light sensors (on all four corners) and 2 line-follower sensors (tucked under the ball-caster assembly on the front).

Handily, Gareth’s added a tactile switch, which I would suggest should be used to safely shut the Raspberry Pi down, although obviously it has other uses, such as starting a series of robot movements. Other features of the robot include 20-slot encoder wheels attached to the motors (and optical wheel sensors to track them) and also four servo connectors on the side of the robot.

This robot kit really does have everything!

After building the kit, I slipped the SD card in, which I had already set-up with SSH and wifi and switched it on. I knew what the IP address was already (I’d paid attention) and SSH’d in from my laptop. I followed the instructions to install the software. The software is a Python library (Python 2, but one can’t have everything) and a collection of scripts. Most importantly, you get a script pre-installed that starts up on boot that shows the IP address on the plug-in display. Other scripts include demos to control the robot using the cursor keys, using the wheel encoders (and without). The scripts basically go through all the capabilities of the main board, but don’t put it together in “one neat package” for you. This is great, because it encourages you to learn how to do it yourself. Documentation is on this page and on there it shows you how to use all the functions in the library.

You can also use Simon Walters’ ScratchGPIO to program the robot – you’ll need to go to his website to find out more, but it’s great that it has that support already!

The Pi2Go is currently only available from the 4tronix website and costs £72 (including VAT). You’ll need to add a 40-pin Pi, batteries and an SD card on top of that. You may already have all those, though!

As the robot is compatible with all 40-pin models of Raspberry Pi, if you have a spare original B+ knocking around, that’ll do the job, or you can do what I did and use a Raspberry Pi 3A+ to keep the costs down a bit.

I am so impressed. Gareth has greatly improved upon his original, already-great Pi2Go series, added feature upon feature, blinky upon blinky and come up with an awesome product. The PCB chassis concept is as good as it ever was and the no-solder assembly is easy enough to do. The use of the edge connectors is a great idea and the compatibility with Pimoroni’s Breakout Garden is a nice addition, giving lots of scope for expansion. The sheer variety of sensors on-board should provide a lot of learning opportunities and the software, in the way it gives pointers rather than full solutions, is a good accompaniment.

The price is, in my opinion, about right. It’s not a cheap kit but it is a sturdy, well-manufactured robot platform sure to give a lot of joy to whoever buys it. I cannot recommend it highly enough as either an introduction to robotics, or as that next move from a simpler kit.

Get your Pi2Go kit here. Don’t forget: For the time being, you can get 10% off everything at 4tronix by using code 4TXPARTY10.