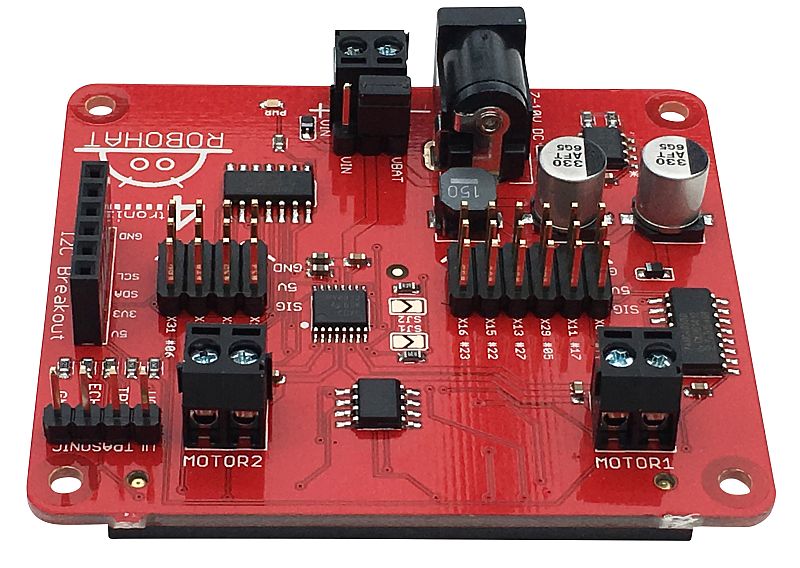 This weekend has given me time to work my way through my ‘review pile’. I’m almost to the bottom of the pile now – just one book to go. In the meantime, however, I tried out two motor controller boards from 4tronix.

To answer this question, I got hold of a couple of new MCBs from Gareth at 4tronix who are based in Derby. Gareth’s solution to the market saturation is to build boards that are simply loaded with features. It’s certainly a compelling argument, so let’s see what he’s come up with this time! 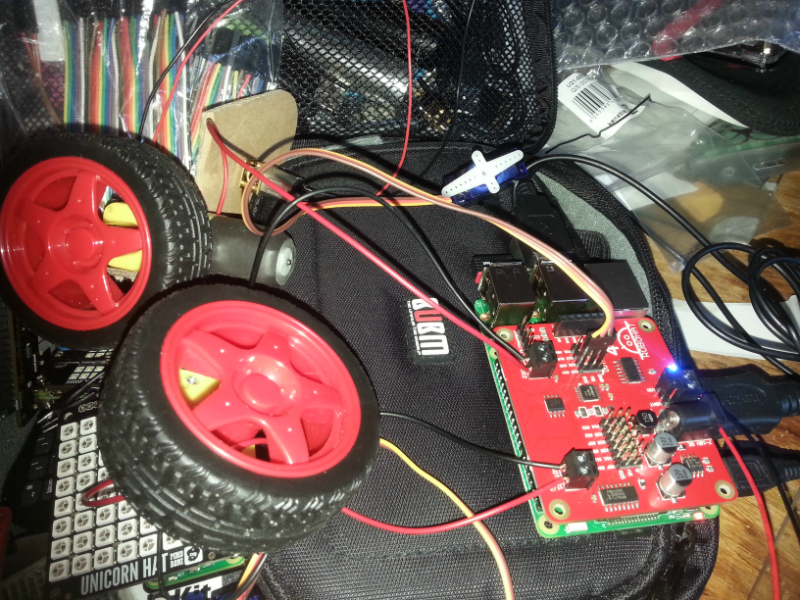 First up is the RoboHAT. This is a full HAT-sized, pre-assembled board with the following features:

Installing the HAT is just a case of plugging it in. It has an EEPROM which configures the necessary overlays and turns on I2C. The instructions are simple – download an installation script and run it. Included in the downloads is a Python library and several test scripts.

I used these test scripts to try the HAT out. I connected up a 4xAA battery pack, two DC motors and two servos and ran some of the scripts and off the motors went. Very simple, very well-featured and, for £24 (inc VAT), very good value. You can get hold of one from the 4tronix website.

Second on the review pile was the Picon Zero. This is, surprisingly enough, a Zero-form-factor board. It is pre-assembled and has the following features:

In my opinion, the Picon Zero is actually the superior board in comparison to the RoboHAT. Yes, there is a bit more manual configuration to do (in the form of a manual apt-get installation of the I2C libraries) and yes it is smaller and has fewer power options. And no, it doesn’t power the Pi from the battery pack.

However, it has more output channels (and therefore can be used to control more servo motors) and, intriguingly, it has analog inputs. The option to set the outputs to digital, PWM, servo or WS2812 is terrific and the ability to simply power motors from the Pi’s 5V power source gives you a lot of flexibility to ‘just use it’ without messing about with a battery pack if your motors are low-powered.

I plugged in two micro metal gear DC motors and four (!) servos into the board and powered them all from the Pi’s 5V line with no trouble.

Like the RoboHAT, the Picon Zero has an installation script that downloads a library and several example scripts. Using these scripts made my motors turn and I had a lovely little display of spinny things with very little effort.

The price is £16 (inc VAT), which is very reasonable, and you can get hold of one from the 4tronix website or from The Pi Hut.

These two boards from 4tronix are excellent. Sure, they are a little more expensive than some (but not all) other options, but the number of features on the boards, and the sheer technical beauty of the board design, are great compensation for that. Honestly, if I was looking for a motor controller board that could control loads of motors, there really isn’t much competition and I have no hesitation in recommending them.

Leave a Reply to Andy from Workshopshed Cancel reply