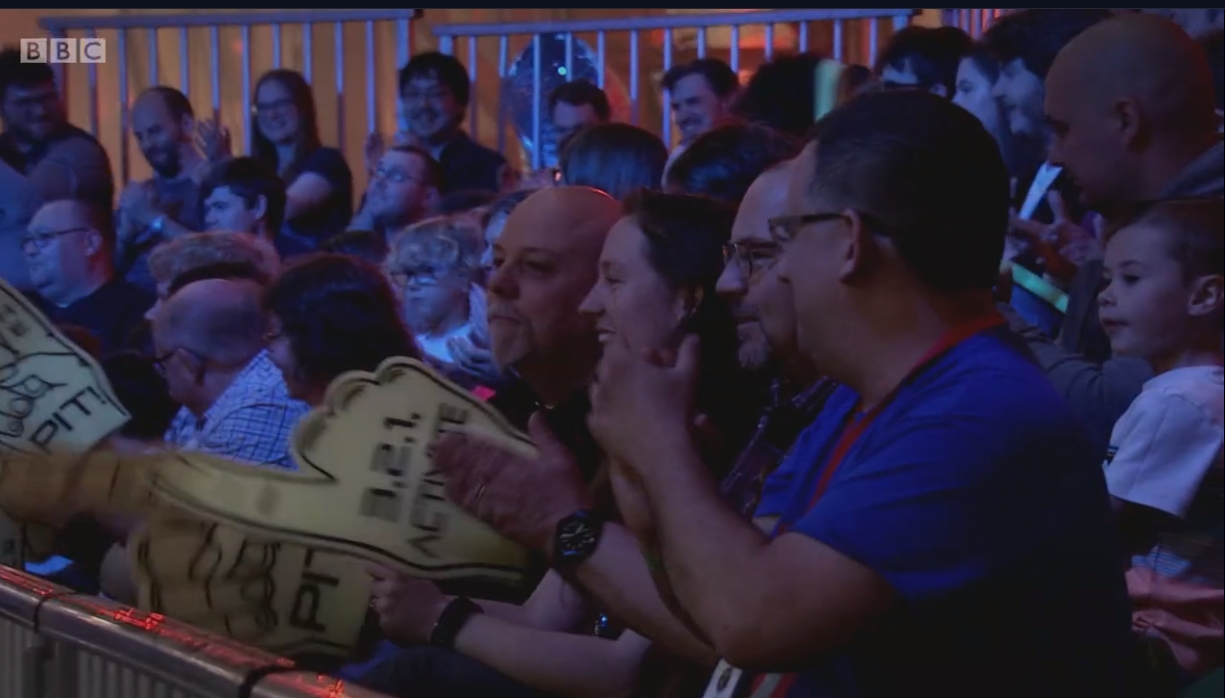 (right to left) Myself, Tim Richardson, Claire Pollard and Tim Freeburn at Robot Wars in Glasgow

Last Friday, Robot Wars producers Mentorn Media tweeted that the BBC had declined to commission further series of the popular robot fighting series. Fans of the series immediately took to social media, especially Twitter, under the hashtag #BringBackRobotWars in the hope that they could find another channel to take it on. I am one of those fans.

I joined the British public in watching Robot Wars during the second series, back in 1998 or 1999. It was enthralling, it was exciting, it was brutal and it captured the part of me which had always been interested in mechanical and electrical engineering. I am the son of a precision engineering toolmaker, and I guess some of that had to rub off eventually, even if I decided not to follow my dad into the family business. Craig Charles brought his trademarked energy to the programme and seemed to be as ‘into it’ as the competitors. The teams were from a wide variety of backgrounds and their creations, which included the famous Razer, Firestorm, Behemoth, Tornado and, my personal favourite, Typhoon exhibited great engineering technique and innovation. When it was cancelled in 2004, the fans felt the loss and, when it was revived in 2014 with new hosts Dara Ó Briain and Angela Scanlon, we were equally relieved and overjoyed to see the series return.

The thing about Robot Wars is this: although the ratings were never at the same level as the lofty heights of Eastenders, or even something more comparable like Blue Planet (and its sequel), it nevertheless appealed to a certain portion of the UK population that wanted to see something a) entertaining and b) inspiring. There’s nothing quite like it on television, frankly. It is/was unique to UK audiences: a series that focused as much on inspiring the next generation of engineers as it did on entertaining the masses.

So how does this relate to the Raspberry Pi? Well, simply, without Robot Wars, it is very unlikely that there would be a Pi Wars, which is now the number one Raspberry Pi robot competition in the world (I know, right!) Back in 2013, when Tim Richardson joined me in organising Cambridge Raspberry Jam, we were looking for something new to bring to the community. Tim’s question about whether I’d seen Robot Wars, and my answer that I’d been watching it almost from the beginning, and his subsequent suggestion that we should try something like that, but with Raspberry Pis, was directly inspired by the series. (You can read a bit more about the origins of Pi Wars here). Although non-destructive (yes, yes, despite the name…), Pi Wars seeks to do exactly the same thing as Robot Wars: a) be entertaining and b) be inspiring. As I recently discussed with some of my Pi community friends: Pi Wars, just like Robot Wars, gives people a reason for doing. There’s a lot to be said for a competition date deadline to focus your mind and even more to be said for designing courses that challenge both the engineering/electronics skill of the competitors as well as their programming skills.

That brings us back round to Robot Wars. Many of the teams in the recent three series were inspired by the robots that previous teams had built. Although I can’t find the quotes right now, several have gone onto Twitter to explain that Robot Wars was one of the main, sometimes the primary, reason that they got into engineering and making. Now, I’m not saying that Robot Wars is solely responsible for a huge resurgence in our manufacturing industry or engineering base, but it has certainly helped!

There’s nothing like Robot Wars on television – although Scrapheap Challenge, also cancelled, came close – for providing that spark for young people to get involved with engineering. There’s very little on television, in fact, that focuses on STEM subjects, an area that we desperately need to grow and that our society, and economy, is going to increasingly rely upon.

The BBC have, in my opinion, made a huge mistake by cancelling the series, but it’s not too late for them to change their minds or for another channel to pick it up. The arena is still waiting in Glasgow, but it won’t be available forever. It’s vital that fans of the series get behind the campaign and, not to put too fine a point on it: #BringBackRobotWars!

For another perspective on this topic, take a look at Robot Wars Judge Dr Lucy Rogers’ editorial piece over at DesignSpark.

8 comments for “Why the cancellation of Robot Wars matters #BringBackRobotWars”