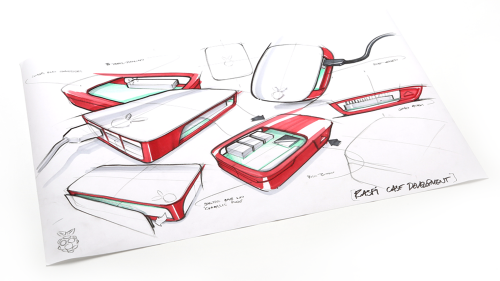 Quite a while ago, Raspberry Pi commissioned designer Kinneir Dufort to come up with an idea for an ‘official case’ for the Pi (see above one of his sketches). Since then, the case has been produced and is on sale at many good Pi retailers. Unfortunately, some naughty people in China (we’ll call them scammers, for that they are) have begun to copy the case, which has resulted in loss of sales of the official case. They haven’t even done a very good job of it: So, please, be on the look-out for fake cases, especially from eBay and places like AliExpress. A dead give-away is the two sets of light pipes and general overall shoddiness. I recommend you only buy them from reputable dealers such as The Pi Hut and CPC.

Remember: only sales of the real official case results in some of the proceeds going to the Raspberry Pi Foundation.